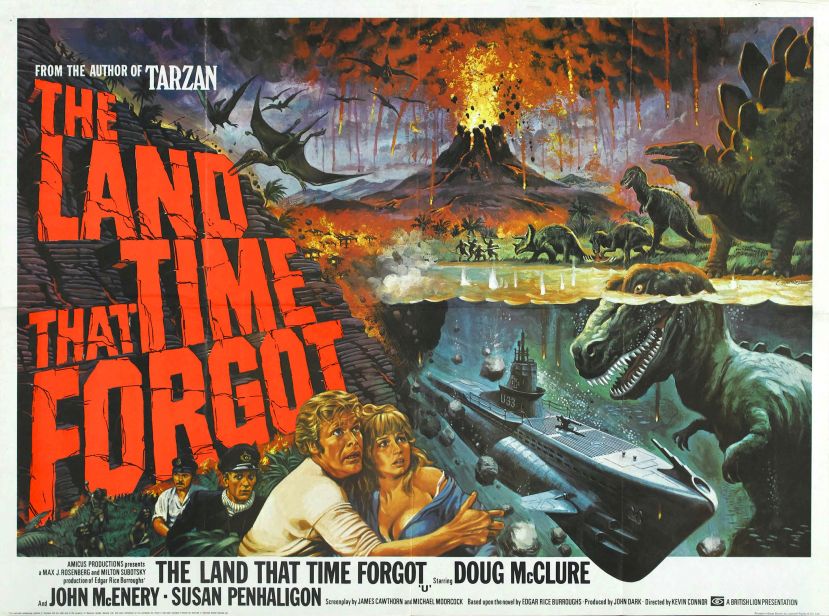 Edgar Rice Burroughs always provided a lot of fodder for the big screen, his imagination as wild and untamed as the situations he envisioned and The Land That Time Forgot is just such a one. Produced by Amicus Pictures, a studio that was no stranger to making science-fiction and horror films, the movie featured a story about a mixed crew of British and German soldiers discovering a lost sub-continent called Caprona, one filled with prehistoric men, dinosaurs and dangers unknown. 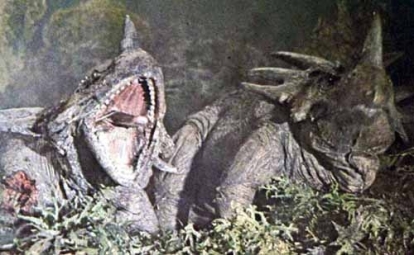 It is an adventure film that starts off a little slow, but once it gets going, it is hard to turn away as wonder after wonder is revealed and the crew starts to find themselves in greater peril every moment that they remain.

When you have a film about giant monsters or dinosaurs or what have you, the special effects are of the utmost importance and depending on how they look and how they are used, they can make or break a film. In this particular picture they may look a little fake as it was 1975 and all, but they are used well like the Pterodactyl and the way it was swooping and attacking the people on the ground. They were especially effective as they were not only thrilling but sad as it made you feel bad when the dinosaurs were killed. As the film went on, it seemed less like the men were trying to escape than simply hunt down every single dinosaur that they saw and when they killed the Styracosaurus near the end of the picture and a tear rolled down its cheek, it was close to heartbreaking. Strange as it may seem, believable or not, when you can feel an emotion for something that is imaginative in nature, that is what you call good filmmaking. 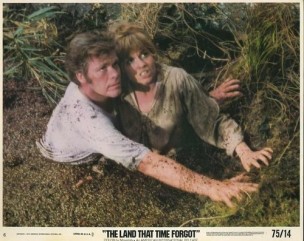 The story itself is not highly original, essentially being the stranger in a strange land theme, though perhaps ending up just a little more complicated than that. The pace is a little slow in places and it does tend to drag every now and then, and for the most part, you enjoy it more than you do not. The cast was able and they delivered the material well, but aside from Doug McClure or the German captain as played by John McEnery, nobody really stood out from the pack as very interesting. Most of them just filled the roles as needed and eventually ended up being cannon fodder for the dinosaurs anyway. If the story and a few of the ancillary elements could have been tightened up a bit, not that Michael Moorcock, the creator of Elric Stormbringer is a bad writer, it might have made for a picture just a little bit more compelling.

The film is left wide open for a sequel, of which there is one, though you have to wonder how much of the land survived after that particular ending. It would have been nice to see something just a little bit more original than what was shown, as there have been many that were similar though not necessarily with dinosaurs. As it is though, The Land That Time Forgot was a fun excursion, one that will be remembered more for the creatures within than anything else. 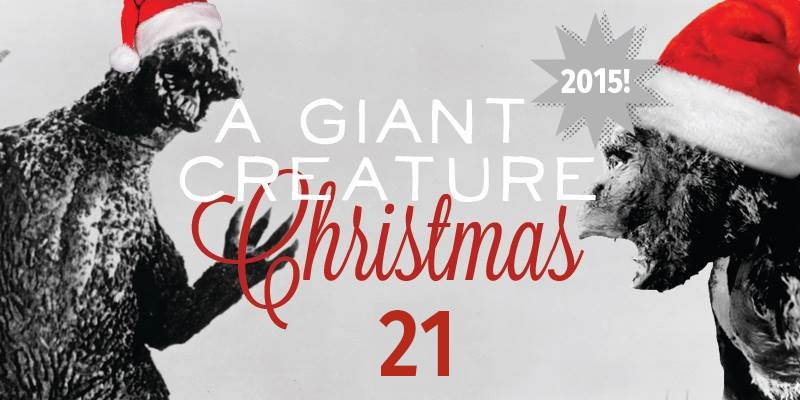