Not So Much – Frankenstein Conquers the World (1965)

If you are a fan of watching sheer insanity, then this movie is for you.  What you get is literally everything that Toho could think of and then even more.  It is a melting pot of ideas that has somehow been melded into a coherent film and if that was not surprising enough, it is even somewhat enjoyable.  It is a little hard to do so at times, enjoy it that is, as the makeup used on the caveman/Frankenstein monster is so atrocious that it really makes it hard to watch and take it even half-seriously.  But watch it you do because it is like watching that horrible accident you see, the one so bad that you cannot turn away and you remember for days afterwards.  That is what Frankenstein Conquers the World is.  It is awful in almost every way and strangely compelling all the same.  It is a conundrum that you just have to watch once you turn it on, and if you are a fan of kaiju films whatsoever, then you need to see this if only for the villain of the picture, Baragon.

The crazy starts with some Nazis who take Dr. Frankenstein’s work, namely the beating heart of his creation, to Hiroshima of all places just in time for the atomic bomb to go off.  Years and years pass when a crazy looking kid eats the now radioactive heart and starts growing exponentially when he gets too much protein.  Once he is all big and tall and no one can stop him, he battles a giant monster named Baragon.  Depending on what version of the movie you see, he and Baragon either die together, or he defeats Baragon and fights a giant octopus creature, only to die with it.  Either way, Frankencaveman dies.

Once the film gets going and caveboy escapes captivity, the pace of the film really picks up and it gets far more interesting.  The first half of the movie is a little dull, and some things cannot be helped as events have to be introduced and set up, though it would have been nice if they had sped things up just a little bit.  The special effects were decent even though the monster’s makeup was pretty rough.  Baragon looked half-decent and would prove to be popular enough to go on and appear in three more movies after this one.  What is really quite interesting to think about is how a lot of these kaiju are able to shoot lasers or flames or what have you.  Most of them seem like simple reptile-like beings, so for them to advance enough to gain these abilities is quite fascinating.  Thankfully, writers Reuben Bercovitch and Takeshi Kimura did not think to give the Frankenstein Monster of this film any such powers, though they more than likely contemplated it. 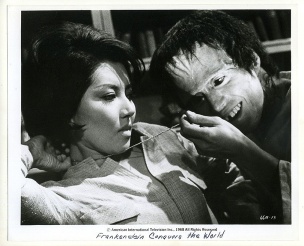 One of the few actual bright spots in the film is Kumi Mizuno who plays Dr. Sueko Togami, the woman who lends comfort to the young Frankenstein-caveboy.  She was far more interesting to watch than anybody else on-screen including American actor, Nick Adams.  Adams and the rest of the actors would do a good job, but Mizuno would steal the show, as much as she could that is.  Always front and center would be the Frankenstein Monster though with his ugly visage, the face you will never forget.

This might not be Toho’s best outing, but it does have a certain appeal, at least as much as every kaiju film does.  The battles that take place between the creatures come the end of the film are the most exciting moments of the film, but on the whole, would not be as good as the sequel it would produce entitled War of the Gargantuas.  Even though it had so-so effects, a so-so script and a hodge-podge of ideas, it is definitely worth a view for curiosity’s sake alone.