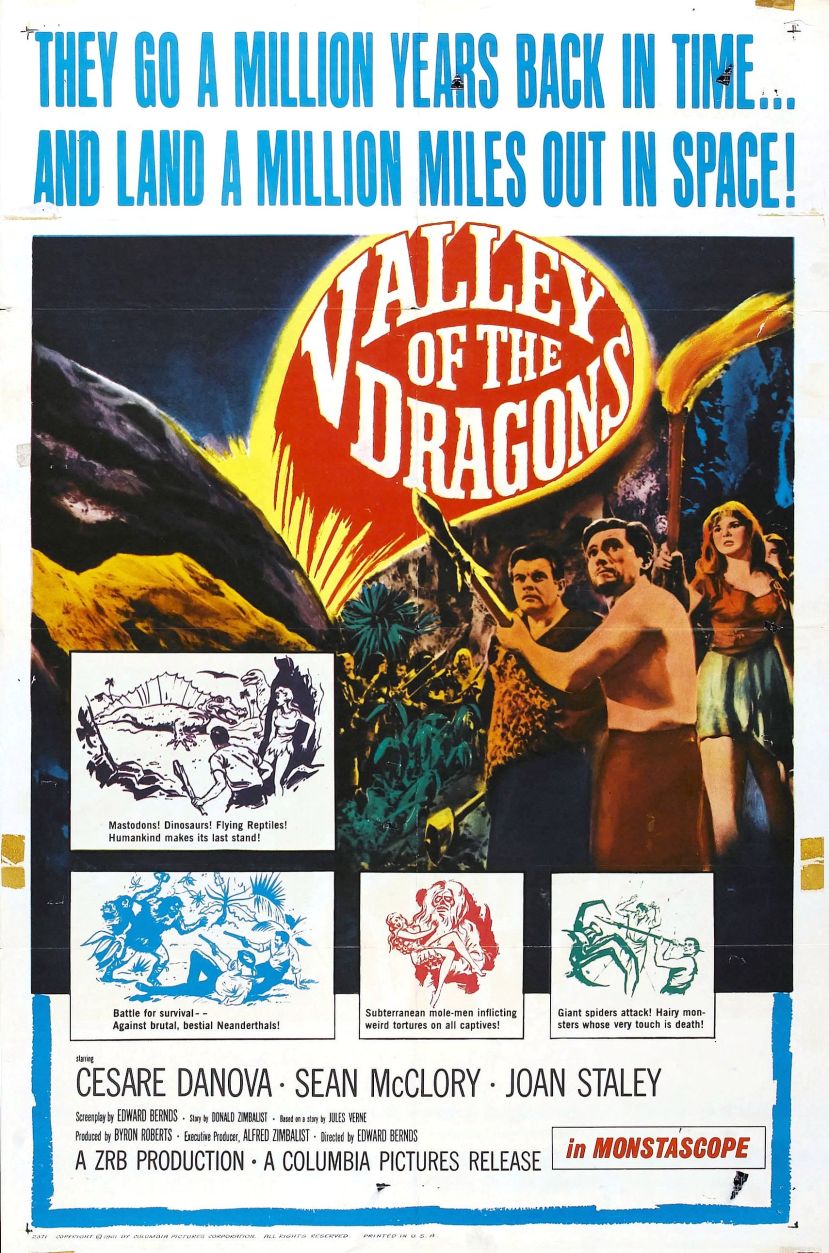 Though cinema was not exactly new in 1961, it was not any cheaper either and a way to keep costs down was to either recycle footage from various sources or to film the everyday in lieu of special effects, an example possibly consisting of a couple of lizards or some such in place of dinosaurs. Valley of the Dragons looks to do a bit of both and while many movies that do this often look cheap and turn out to be atrocious, this film surprisingly does not. Whether it was a case of choosing the best footage for the part, careful editing or a combination of both, Valley of the Dragons looks good and was quite enjoyable as a result.

The story concerns two men, Hector and Michael, who are about to have a duel when an asteroid comes into contact with the Earth, scraping up a portion of the planet, including the two men and transporting everything through space wherever said comet was to go, a place where giant creatures still roam and members of the human race exist in a caveman-like state.

Michael and Hector decide to put aside their grievances, realizing that they will need each other to survive in this new, strange climate and in doing so, they find love, conflict and quite possibly, a new home.

As far as adventure films go, and being bastardized from the Jules Verne story Off on a Comet, it does a good job even if it may have little in common with the tale except for the basic premise and one of the main characters. Be that as it may, the concept is interesting, if completely and impossibly ridiculous, but where science-fiction is concerned, anything is within the realm of actuality. Recycled footage or not, the creatures looked great and quite intimidating at such a large size.

The quarrels between the various tribes made things much more compelling to watch, especially as our heroes became separated and were forced to join up with different groups who are not so friendly towards the other. Cesare Danova was the better of the two actors as Hector, though Sean McClory put in a good performance as well as enemy-turned-comrade, Michael. The material may not have been of the highest caliber, in fact telling a pretty standard story once it was all said and done, but it does deliver and the picture manages to breeze by as you watch the prehistoric montage play out.

What would have been nice to see is the movie going a little deeper into the science of how such an event could have happened, making it perhaps a little more meaningful than the subject matter that what was shown, but such as it is, Valley of the Dinosaurs was a nice excursion that will entertain despite its familiarities and lack of innovation.