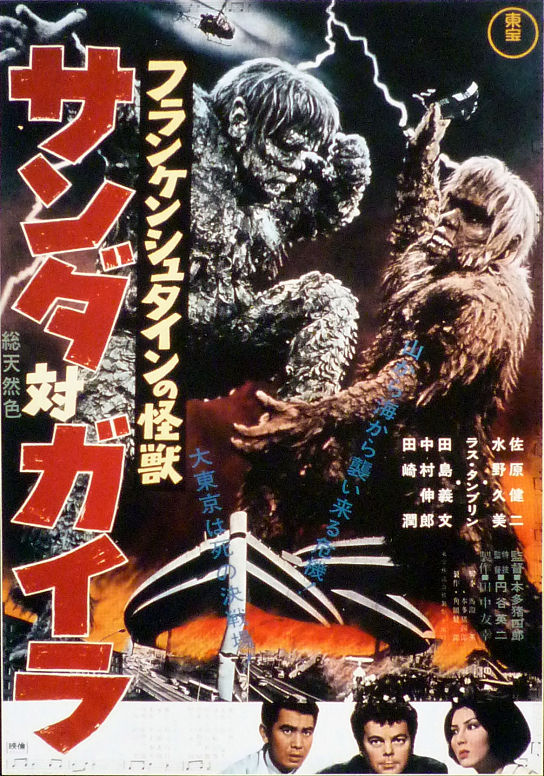 In the last outing of this year’s month-ish long look at giant creatures, War of the Gargantuas, the sequel to Frankenstein Conquers the World is the picture of choice.  It was thankfully a lot better than its predecessor having less crazy, less story and more action.  While it is said to be a sequel, it in fact has little-to-nothing to do with the first film other than having a similar looking monster and some very slight references throughout to that first movie.  So really, should you only wish to view one of the films for whatever reason, this one is the way to go.  Saying that there is more action in this film is like the difference between a drizzle and a thunderstorm and there is a lot of action, from the opening scene of the film to the closing; with non-stop battles between the kaiju brothers or between that of the kaiju and mankind. Frankenstein Conquers the World would be the metaphorical drizzle while War of the Gargantuas is the thunderstorm, there is that much of a difference.  And just what is the plot of the movie you ask?  Well, the green gargantua wants to eat humans and after a number of deaths, humanity starts to fight back.  Soon the tan gargantua is looking to aid his brother at first and then later, decides to put him down for good.  It is very simplistic, and yet, if you were looking for a masterpiece in filmmaking, you are watching the wrong film.  This is a big, all-out monster war and nothing else.  The film knows it, revels in it and it turns out to be a lot of fun.

And fight these monsters do!  When it is between the human forces and the monsters the battle scenes are a little one-sided until the lasers are broken out.  But when the monsters are fighting amongst themselves, it is some of the most comical fighting ever seen in a Toho film, not to mention any kaiju movie.  The choreography is ridiculous and whether some of the fights were just improvised is unknown, but there was a lot of grappling and the ‘you want some of this?’ motions going on to really be taken seriously.  But in retrospect, you do not watch this film for anything serious.  Almost the entirety of this movie was of the two monsters in some sort of fight with little bits of our two leading actors trying to figure out what to do about the creatures until it is taken out of their hands for a final resolution.

To say that Ishirō Honda’s film about the brothers Sanda and Gaira is terrible would be false, silly yes, but terrible no.  It is a truly, simple little film that is above all else, quite enjoyable.  The monsters look great even though they have some obvious dental hygiene problems.  The costumes were much better than Frankencaveman from the last film looked and perhaps they were pretty fake to the eye, but the practical effects, namely the sets, looked very well done. Russ Tamblyn and Kumi Mizuno did a good job of playing the leads in the film and though they had little to do except narrate what was essentially going on with a little background here and there, they made the most of it.  What would have been nice to see was some actual story with more ties to the first film, but as it was, War of the Gargantuas is something that everyone who loves monsters should see.