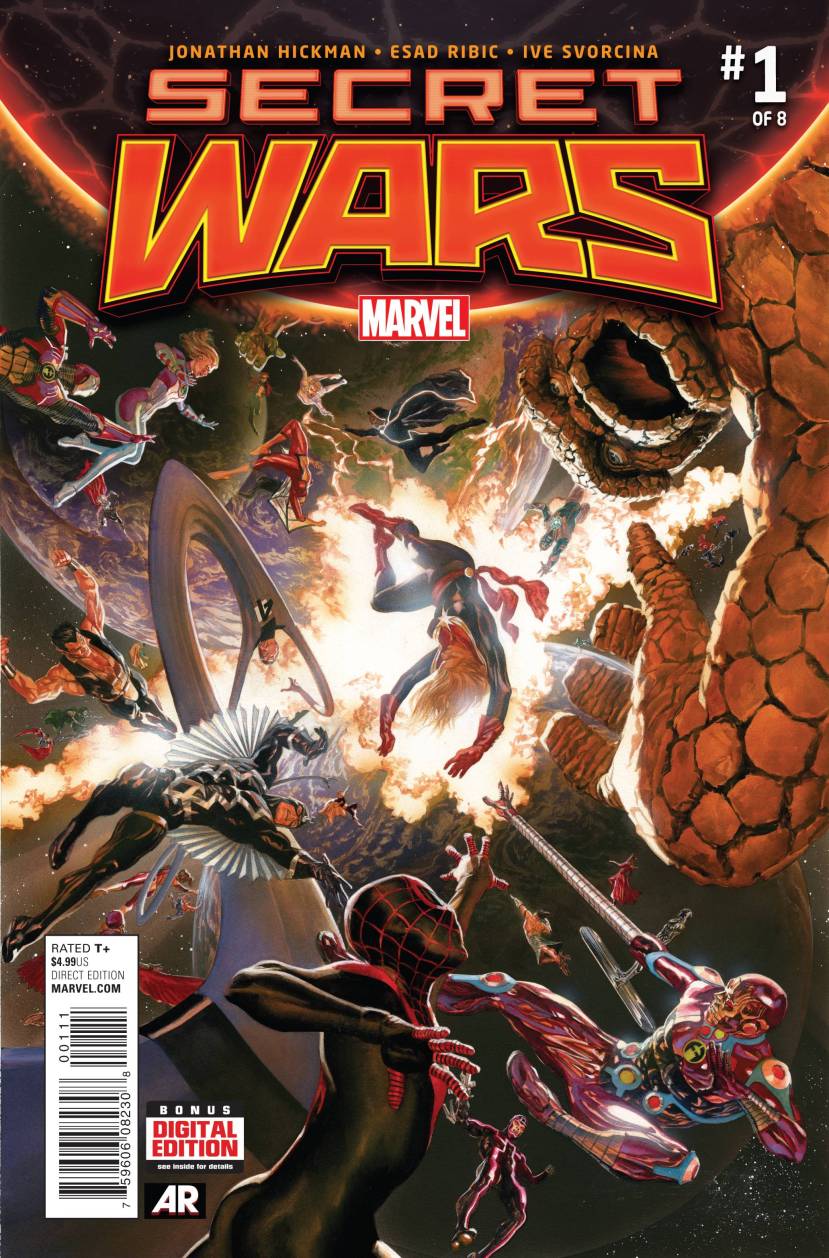 The first issue of Marvel’s next big event hits and it continues directly from the end of both Avengers #44 and New Avengers #33 as doctors Doom and Strange face the Beyond and the Avengers, the X-Men, the Fantastic Four and every other hero available faces down the might of Earth 1610’s forces. Better known as the Ultimate Universe, the cadre from Earth 1610 led by Nick Fury takes a beating and literally fails at trying to overcome the forces of this Earth, also known as Earth 616. But the tide soon changes as the evil Reed Richards from that alternate Earth has launched his own forces and soon our heroes are falling alongside the enemy combatants. In the end though, everyone is just doing what they have to so that they might survive. Jonathan Hickman’s writing is taut and suspenseful as we watch the two worlds battle it out in a fight to see who lives and who dies. It is shocking to see some of the heroes you know and love meet their fates as they do and yet, you know that somehow they are going to come out the other end of it all right, or at least you hope so. There are some really great character moments with one involving the Punisher which is so spot-on perfect you cannot help but chuckle, along with others featuring many of the heroes. What is also fun to see is how the two Reed Richard’s are so completely different and yet the same in various ways and motivations. Both want to live and want their respective universe’s to come out on top and both are willing to do whatever it takes but the two go about it in completely different ways which really shows just how different these two worlds are. The Cabal puts in an appearance yet does very little except for that, Cyclops does what would almost be considered unthinkable if not for this given circumstance and others risk everything knowing that it is better to try then to simply give up. Esad Ribic’s artwork is lush and gorgeous, miles ahead of anything he has done before and it is probably one of the most beautiful books that Marvel has put out in some time. Finally, the book ends with a cliff-hanger as the two world’s die and a preview for the next issue that makes you chomp at the bit to find out what comes next. This was a truly great start to what might be the best Marvel event of all time.

Convergence might have started off a little slow but it has been picking up steam ever since and this issue is no slouch when it comes to action and excitement. Deimos has a plan and part of that is to make the heroes of Earth 2 fall in line along with the people of every other abducted city so that in the end, he might rule over them all. The only problem with that is the fact that with heroes being heroes, they will not just blindly follow any old villain who thinks he knows what is best for everyone and thus we are treated to a battle between Deimos and those Earth 2 capes as well as seeing Deimos make Telos cower and see him destroy Brainiac, or at least a version of the monster. There are some shocking moments to be had such as the possible death of Tara, of Machiste and even Travis Morgan though only after he makes one of the best entrances ever to find Deimos and put a hurt on him for Tara’s injury. With the power of the Time Masters behind him though, Deimos is undefeatable and more powerful than ever as is evident when he also bests Superman of all people. So with Brainiac out of the picture for now and Telos wallowing off in a corner, Deimos now stands as the big bad of the picture. One thing that Tom King does do to keep us intrigued is offer up the origin of Telos and while we are only shown a part of it, it makes you wonder just who he could really be. In the flashback Telos has a mohawk so could he be Arak, Son of Thunder? Or maybe he is The Viking Prince from another reality? The possibilities are endless and now that the book has gotten so good as of late, the next issue cannot come fast enough. Great stuff all around from DC, Tom King and Andy Kubert.