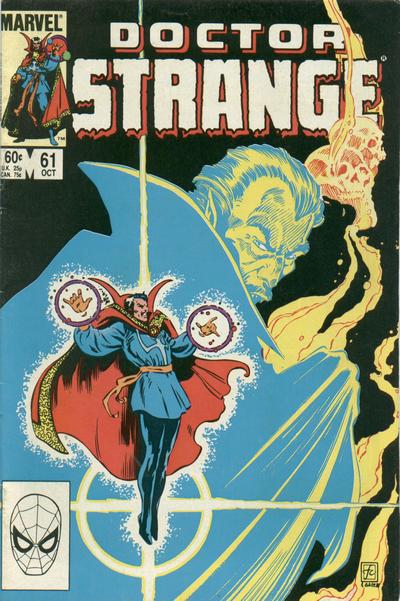 Though Dracula might have retreated, the monster is by no means defeated and in this issue, Roger Stern and Dan Green bring together more people to the side of Doctor Strange, specifically Hannibal King, Frank Drake and Blade, the Vampire Hunter. With their help, in addition to Strange’s assistant Sarah Wolfe, and his sort-of girlfriend, Morgana Blessing, they have been trying to throw Dracula’s followers off the trail as to just where the Darkhold now lies. The Darkholders are persistent, though they have no choice in the matter when dealing with the Lord of the Undead. If they are not compelled to do so, they do it then for fear of their lives and so begins a game of cat and mouse as Doctor Strange sets up a series of feints for them to follow.  As that takes place, he and the companions head to Baron Mordo’s castle to find the book and cast a spell that will hopefully rid the world of the vampire scourge. One very interesting thing that Stern does in this issue is recount the origins of the vampire in the Marvel Universe. It seems, at least as far as Dracula recounts it, vampires were created by using the Darkhold which must be why Strange thinks there must be a spell within the book to be rid of them. One thing that is never quite explained is just how it is that Dracula rose to the top of the heap, how he became lord of the vampires, for if they were created centuries before, what makes Dracula so special? In addition to all of that, the book ends up playing out as something of a thriller with just a touch of horror as the players go about trying to trick and to evade the villains. The race across the globe is suspenseful as they know that sooner or later, Dracula will come for them and when that happens, it will take everything they have to put him down. So far, as history has shown, that has been somewhat impossible to do, thus the reason to reach the book and hope it holds an answer. With some great artwork from Green once again, aided and abetted by Rick Magyar and Bob Sharen, the book not only reads well, it looks good too. Of course, there is a cliff-hanger to keep the reader coming back for more and it does just that.