Spies, Gangsters and the… – Creature from the Haunted Sea (1961)

Produced and directed by Roger Corman, Creature from the Haunted Sea is one of his all-time worst films and the man can claim to have at least a couple that are truly awful. This movie is not simply just one of Corman’s worst but one of filmdom’s worst as well as it features almost no redeeming qualities

about it other than perhaps the creature itself and the ending of the film which makes a person smile should they make it that far without turning it off.

Meant to be somewhat farcical and to be fair, it is, the merging of horror, comedy and spy genre does not work as well as it should have. Is it Corman’s fault? Perhaps but it can also be chalked up to the terrible acting found within and the atrocious script from Charles B. Griffith whose attempt at injecting some laughs into the movie fails completely. Those moments that are supposed to be funny somehow make the picture seem longer, like 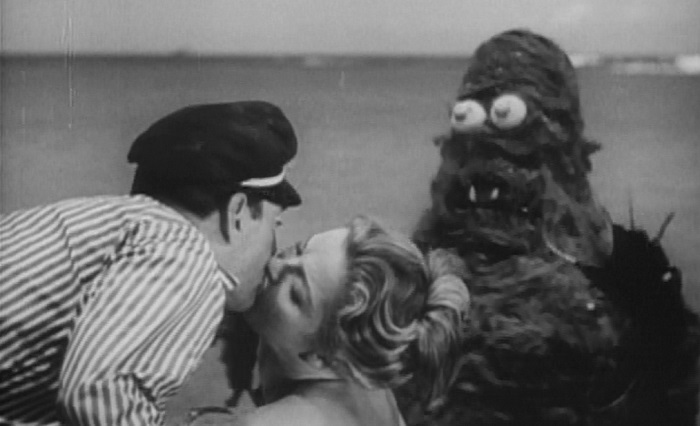 one is waiting for the punchline or the audience to break into laughter or something and when that does not happen, it is almost like the film is begging to be put out of its misery. Sadly it continues on for nearly an hour and fifteen minutes.

The very best scenes come with the creature when it is on-screen and even though it looks ridiculous, like something Jim Henson travelled back in time to throw away so nobody would ever find it and yet someone did, it at least gives the film the tiniest sliver of seriousness to keep it on track. As for that last scene, all anyone hopes is that the monster will win out and nobody makes it out alive and one can at least infer that at least with that concluding shot, that did indeed happen.

For those looking for a true curiosity, Creature from the Haunted Sea is that. It is also a good dose of terrible heaped on top of a lot of bad and while some might say there is a bit of charm here, Corman has other pictures that are far better by miles and miles.