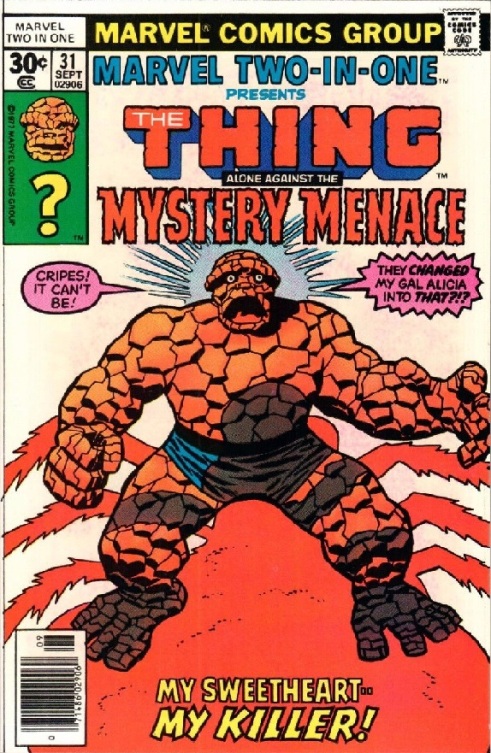 There have been some unusual team-ups in the Marvel Two-In-One series, but Marv Wolfman turns it up a notch with a cover only revealing that The Thing will be teaming up with the ‘Mystery Menace.’ While it does make the reader question just who it could be, there is already a guest star in Spider-Woman present and until the mystery is revealed, the story still manages to be a lot of fun. Suffice it to say, the mystery is not quite what the reader might have been suspecting and it is not exactly worth the payoff, but that matters little as the tale that Wolfman and artist Ron Wilson tell is not only a good one, but one full of action and intrigue which keeps things moving along. One of the things the reader does get an answer to is the identity of the thieves, specifically the older gentleman and just why it is that they have been running all over London treasure hunting while trying and not really succeeding in evading The Thing. Some good backstory is revealed involving Nazis and some fantastic treasure worth a fortune, spies and the bombing of London and it then takes it all back to the present where the thieves are ready to put the final act of their plan in motion. As for Ben Grimm, he is missing Alicia painfully and he cannot bear to think that he might never see her again. With Hydra in play and having kidnapped her, there is every chance that she might never be seen from again, but Ben gets his wish and Alicia does indeed return, just not as he would have liked. Wolfman packs a lot of story and dialogue into this book, a little more than usual and it takes a while to make it to the end which then finishes on a cliff-hanger, hopefully to be wrapped up in the next issue. Though Spider-Woman is in the story, she does little in this particular tale other than to offer peace of mind to Ben, or at least as much as she is able. Wilson’s artwork continues to be fantastic, the man always making each page look the best that it can be and is responsible for making it just as exciting as Wolfman does. For the first half of the book, it starts out just a little slow, but it soon picks up and when it does, the action continues as if it were a movie on the big screen. One thing that makes this book along with the past few issues slightly funny, is that by this point, The Thing and all those that he has tussled with have destroyed a good portion of the city and if logic were to be introduced, one would think that the British government or some of its own superheroes would have gotten involved by now. As it is though, it manages to be a great time and that last panel is one of the better endings to hit the series in some time.