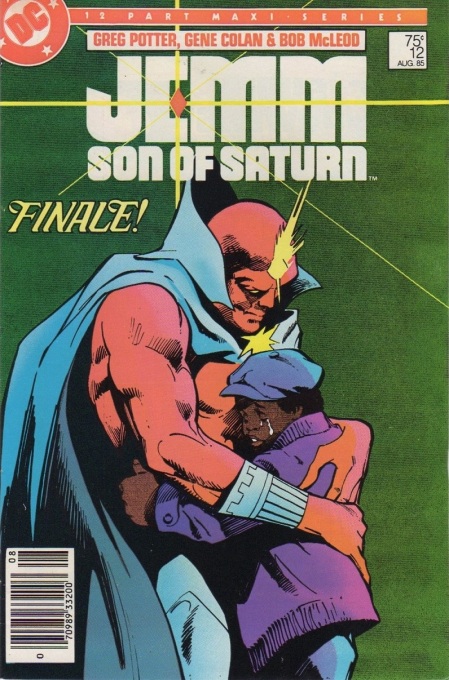 The final issue of Jemm, Son of Saturn is a mixed bag of emotions because Greg Potter and Gene Colan take the reader on a roller coaster ride from Earth to space and back again, featuring all of the characters introduced in the series and their final fates. Some of them have happy endings like Bouncer and Lincoln and Luther while others like the Red and White Saturnians are somewhat vague. As for the fate of Jemm, it is not what was expected and it is somewhat sad and yet, in the end much like the rest of the series, there is hope. The bulk of the issue is taken up by a battle between Jemm and Kamah, the former not really wanting to fight after everything that he has been through, but not wanting to see his friend Luther die either and the latter wanting her revenge upon Jemm so that she might regain her honour, something she feels was stolen by the Red Prince. Colan outdoes himself on this last book, holding nothing back as the fight between the two rages through the streets of New York City. For the reader, most of this story is quite satisfying and at first, some might find it the opposite as everything that Potter has been leading to does not actually manifest itself. All of it is explained though and while certain parts might lead the reader to feel a little sadness, Potter does write the book in a way so as to give the audience themselves that hope he has been putting down on every page for the last eleven issues. Hope has been the main theme throughout the entirety of the series and after all is said and done and after thinking on it for a little, Potter leaves it up to the reader’s imagination to fill in those blanks, to think on the future of those he has brought to life and one cannot help but to have hope for them all. As it is, Jemm does bring a sort of peace to his race though it comes at a price and he does manage to win out in the end, though it too ends up costing him, perhaps not as much though for by saving Luther, he has saved a friend. The last couple of pages by Potter and Colan are truly moving, packed with emotion that definitely sticks with the reader long after the book is finished. For the most part, this was a perfect series that its creators should be proud of with little fault to be found in any of its twelve issues, a series that might not have seemed very long, but ended up being long enough. It is definitely worth a read.