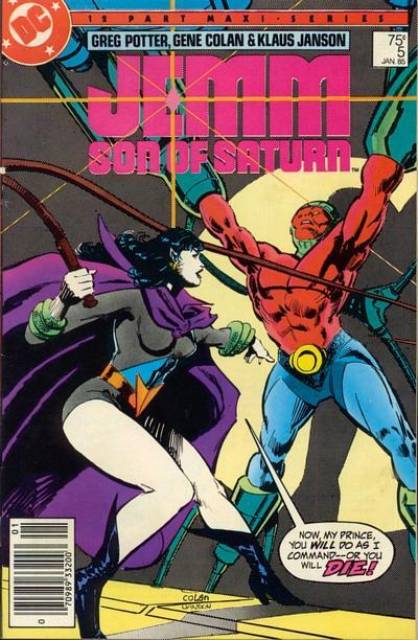 After not knowing for sure if he was the last Saturnian alive, Jemm ran into a White named Kamah and after she was defeated, he had to know if there were more or if she too was the last of her race. That question has definitely been answered as Jemm finds himself a prisoner of the Koolars on their ship, being tortured not only for information, but simply because he is a Red. It is here that he learns from a woman named Synn, who also happens to be the commander of the ship, that when the apocalypse struck their home world, the Whites had already been preparing ships for war and so it was an easy matter for them to get aboard and escape. The only problem was the lack of males among them – needed so that they might propagate their race once more. Greg Potter and Gene Colan paint a desperate tale, one filled with cruelty as well as they tell of the White males used as nothing more than slaves while searching out a place called New Bhok where some Red Saturnians supposedly survived. That little bit of knowledge lends a bit of hope to Jemm, but first he must find Luther and make good his escape before doing anything further. Like the previous issues, Potter keeps his theme of hope running through the story but does not make it as prevalent as some. There is a lot of good action present as Jemm soon escapes his bonds and starts looking for his friend. It is not too long before the Koolars have their hands full, not only with the Red Prince, but with a legion of vermin who have made their home aboard the ship. Also continuing from a previous issue is Superman who has sought out the Saturnians and come upon those who live in New Bokh. Colan’s art is simply stunning and with a little help from Klaus Janson and Tom Ziuko, it really manages to pop off the page whether there be action present or not. Colan and company are just as good at storytelling as the man who puts the words upon the page, case in point the image of Jemm hanging helpless as he is being whipped conveying a myriad of emotions that words could not do justice. If there is one thing that really makes this book as good as it is, it is how Potter and Colan and the rest of the team work in tandem to create the best possible product and it definitely shines throughout. Leaving things off on an ominous note that begs the reader come back for more, the fifth issue of Jemm, Son of Saturn is one not to miss.