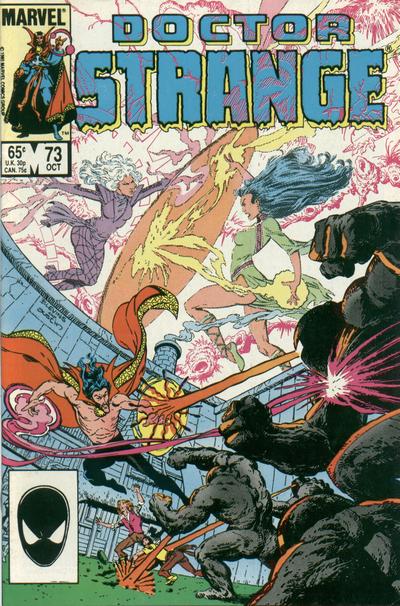 Clea has been captured and Stephen is finding it difficult to work with the Outcasts as everything starts to look pretty grim in this seventy-third issue of Doctor Strange. Umar has declared herself the victor as it were, all-powerful and benevolent, but for those that have felt her wrath know her to be anything but. Strange has had it with the Outcasts and displays a show of immense power, declaring that he will defeat Umar by himself if he has to and as a result, things start to turn his way as the Outcasts then decide to join him. Things further fall apart as it is revealed that Clea is not the person that is imprisoned, but her father Orini, all thanks to an illusion spell. All of it comes together and leads to a showdown between Umar and Clea, mother versus daughter, that will see the Dark Dimension changed for better. Roger Stern pens a mighty tale with this latest issue and once again, the focus is on family with a little bit of morality about what is right and wrong thrown into the mix. What is a little surprising about the entire saga is that Dormammu never once showed his face, except in flashback that is, and while it would have made things interesting and especially hard for the heroes, it does leave the door open for Clea to battle the monster when he returns at some future point. Stern splits the story evenly between master and pupil with this issue, Strange doing his best to rally the citizens and the Outcasts to rise up and overthrow their tormentors while Clea faces her mother for the keys to the kingdom. Both are exciting to see, but seeing Clea finally come into her own and exude a confidence rarely seen from her character was by far the better part of the story. Also great to see is the fact that she now has a stronger command of her magic, using it to come out on top in the confrontation, not only surprising Umar, but Strange as well. Paul Smith does a fantastic job with his illustrations, his page layouts being especially good in this story, creating some real excitement with each chapter. Best of all was the fact that this story arc was not overlong and was captivating as a whole, making the reader eagerly await each successive book until the big finale. One has to wonder though – where to from here?