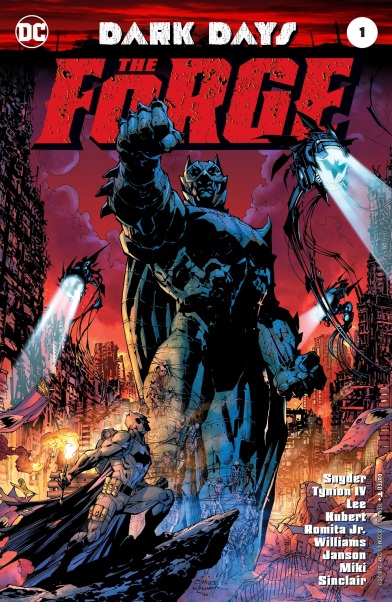 The Story – Batman has been keeping secrets which is no big surprise, and it has to do with all different kinds of metal. It also somehow ties into Hawkman’s Nth metal which is referenced in flashbacks, Hawkman having recently died.

The Take – Like many a Batman story, it begins with the man doing something mysterious by rescuing a scientist from one of his black sites, a place Aquaman was even unaware of, it being in the ocean and all. From there, Scott Snyder and James Tynion IV move the story through a series of vignettes which find Batman doing various things, Green Lantern being dispatched to discover whatever it is, flashback scenes with Hawkman far in the past and a trip to the Fortress of Solitude. While it might seem kind of like a patchwork story, it flows seamlessly from start to finish, especially surprising due to the fact that there are three separate art teams present on the book. Each act is paced well, building upon the previous so that the mystery of what is going on keeps the reader guessing, wondering just what it is that Snyder and Tynion IV are working towards. The artwork is sharp and polished, as good as one would expect with the level of talent involved and like the story, it flows well as each merges into the next. Nice to see is Hawkman playing such a predominant role in the book as it is essentially a Batman story that is being told, but on the other, one could say that this is really a Hawkman story too, and one has to wonder if this is how Carter Hall makes a return to the DCU at some point. In this prelude to Metal, it is interesting to see Duke Thomas get such a prominent role as well, though Snyder has been building the character up for quite some time, perhaps as a lead-in to whatever is going to happen during the event. By looking at the past, the authors of this tale also happen to be grounding the book there, hinting at and showing that whatever takes place originates from many years gone by and at least some of it, having to do with Batman himself. Additionally there is a big reveal on the last page of the book and Dark Days: The Forge piques the interest of readers significantly enough, that buying Metal when it comes out is a certainty.