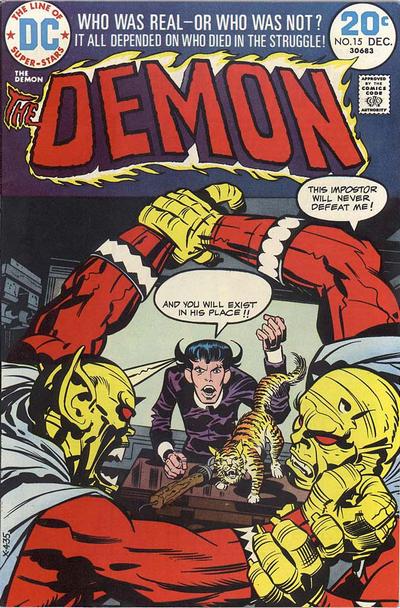 Klarion stands triumphant, or at least he thinks so, as the Demon has essentially faded away to nothing and his doppelganger now stands in his place. The one thing that Klarion never bothered to factor in though, was the fact that the Demon had possession of the Philosopher’s Stone – a magical rock that can essentially make wishes come true and thanks to Glenda, she wishes the Jason Blood she knew to come back. That is all the Demon needs to make a return and he heads straight for Klarion who unknowingly is celebrating his victory. The last time that Klarion was seen, Jack Kirby painted the Witchboy as a victim, a powerful one and a character prone to mischief – but still a victim. Though still a prankster, Klarion has come back purposeful, dedicated to doing one thing and that is getting rid of Jason Blood and the Demon so that there is no opposition to him remaining in this dimension. Despite his evil intent, Kirby instills Klarion with a sense of fun, perhaps one that is a little malicious in nature, but he makes the reader like him no matter the villainy he might perpetrate. Kirby also manages to pepper the book with more of the fantastical than usual, a lot of it coming from Teekl – Klarion’s cat whom he transforms into humanoid form so that she might dance for him. Of course, things all come to a head soon enough as the original Demon finally meets up with Klarion and the imposter and it is a fierce battle as Klarion looks to put him out of commission permanently. What is most interesting is seeing the Demon do things that he has never done before; shrugging off incredibly powerful attacks which he chalks up to the defensive spells of Merlin. Klarion is astounded of course and when things are all said and done, Klarion is dispatched to yet another realm where he can do no more harm. One thing that can be guaranteed is that when Kirby brings Klarion the Witchboy into the book, it never makes for a dull time and it gives the man the chance to really stretch his muscles, both in art and words to deliver up something really special for readers. Aided and abetted by Mike Royer, the fifteenth issue of the Demon is a truly great and more importantly, fun read.

*Weirdly enough, the cover is missing some words and should say, “Kill Him! Kill The Demon! And You Will Exist In His Place”