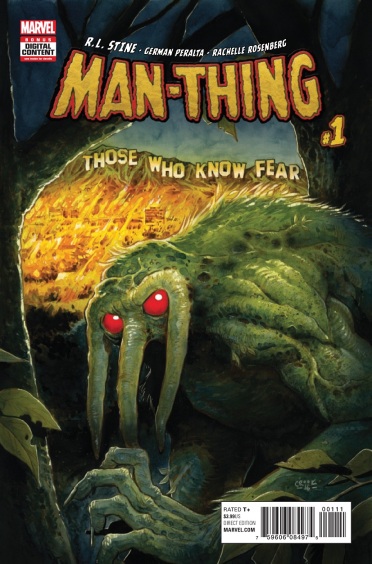 The Story – A now cognizant Man-Thing is finding trouble getting work as a muck-encrusted monster. The origin of the creature is also re-capped for readers while a back-up tale about a magical ring and the trouble it brings is featured.

The Take – Marvel welcomes aboard celebrated author R.L. Stine in their latest get and gives him a book that clearly suits his talents. Man-Thing has always been on the fringe of the Marvel Universe, a B-lister that has rarely had a series that lasted very long, yet a character that always makes an impact whenever he appears. Stine seems to understand the character, yet this is not the same Man-Thing that everybody knows and loves, instead it is a Man-Thing that is not as mindless as he was as the soul of Ted Sallis has returned to its body and he can now speak and express thoughts whereas before, he could not. There is not a lot that is new present in the book as Stine goes on to recount the origins of the monster, which is great for new readers who might be unfamiliar to the character, but not so much for those who were hoping for an all-new adventure. There is a bit of tale that presents itself though and it finds Ted up against another version of himself, a mindless version of who he used to be and for the moment, it ends in something of a stalemate, neither able to get the upper hand. German Peralta makes it look beautiful and it leaves the book off on a bit of excitement, enough to bring readers back to see what happens next, which in the end, is a good thing. Stine also writes a short back-up story, much like an old E.C. horror story or those found in House of Mystery or House of Secrets from many decades ago that turns out to be a lot of fun. Overall a solid package that only has room to grow.