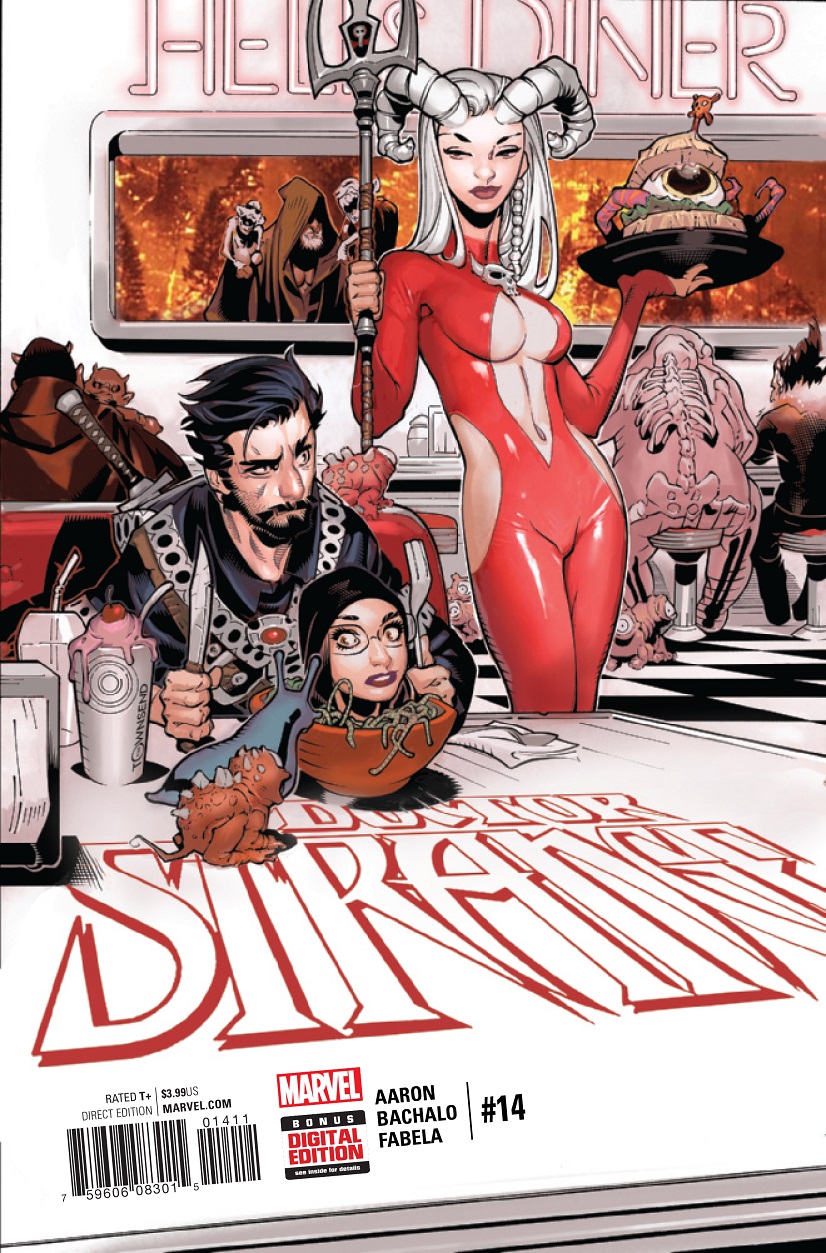 Stephen has been through a lot of late and Jason Aaron and Chris Bachalo are not finished with him just yet. At the moment, he finds himself a prisoner of Satana, before which he has had to deal with Baron Mordo and Nightmare and the fact that he has lost most of his magic and is not the man he once used to be. Satana realizes all of that and has quite rightly, taken advantage of the situation. What Strange soon comes to learn is that Satana has no designs on a battle with the mage, nor some nefarious purpose. She simply wants him to die so that he might become the new star attraction at her All-New, All-Different corner of Hell. All Stephen has to do is eat a little bacon cooked up by Master Pandemonium and all will be right with the world. Strange has absolutely no designs on doing so and if he can manage it, he is going to get out of this Hell as fast as he possibly can. You can tell that with this particular story, Aaron is having a lot fun writing this issue and having a little jab at Marvel along the way, playfully of course. Though he has been able to do so previously, Bachalo cuts loose even more so than usual and the book is filled with all kinds of weird and incredible designs. It is absolutely thrilling to turn each page and not know what to expect, something that rarely ever happens in a comic and Bachalo makes the book all the more compelling because of it. A nice inclusion to the issue was Master Pandemonium, a villain that has not been seen in some time and one who is more often than not, looked upon as a joke. That does not really change so much here, the man now being turned into Satana’s chef and though he is played for laughs, he is still not to be trifled with. This new change for Satana is also a welcome one as we finally get to see her as a real threat, despite the tone of the book being a little on the light side. So far, Aaron has been bringing back villain after villain and the book leaves off with yet another one making his return. 2016 is definitely a good year to be a fan of Doctor Strange and this title continues to prove that time and time again.

Since their debut last issue, The Black Cats have been causing nothing but trouble, especially for Ian who has a history with their leader Zoe. The two used to be roommates and to say that she was not a nice person is putting it lightly. Now, as they face off in the street, Ian’s anger is getting the better of him and it is making him reckless. Continuing to chronicle Patsy’s adventures is Kate Leth and Brittney L. Williams who do not seem to know the meaning of a bad story because with each consecutive issue, they keep knocking it out of the park. The book also stars as its villain, not just The Black Cats, but their boss, The Black Cat, who had hired them to make Patsy’s life miserable and so far, it is working on a couple of levels. Ian is none too happy, Bailey is still a prisoner and Patsy is just trying to hold her group of friends together. It is not too long though, after a few memories and some new found confidence, that Ian comes out of his funk and is ready to put a hurt on The Black Cats and the woman that made his life a hell for so long. Williams peppers the book with some good action scenes and even Jubilee gets in on the fisticuffs which is great to see. Ian gets a new costume and is starting to use his powers like never before and yet, at the end of the day, it all ends in a stalemate – for now at least. There is of course some humour amongst all the regret and bad memories and Leth does her best to create a nice balance in the book which works quite well. If there were ever a perfect villain for Patsy Walker, Felicia Hardy turns out to be one. Patsy Walker, A.K.A. Hellcat is a genuinely entertaining book, one that never disappoints in an ever-changing landscape called comicdom.