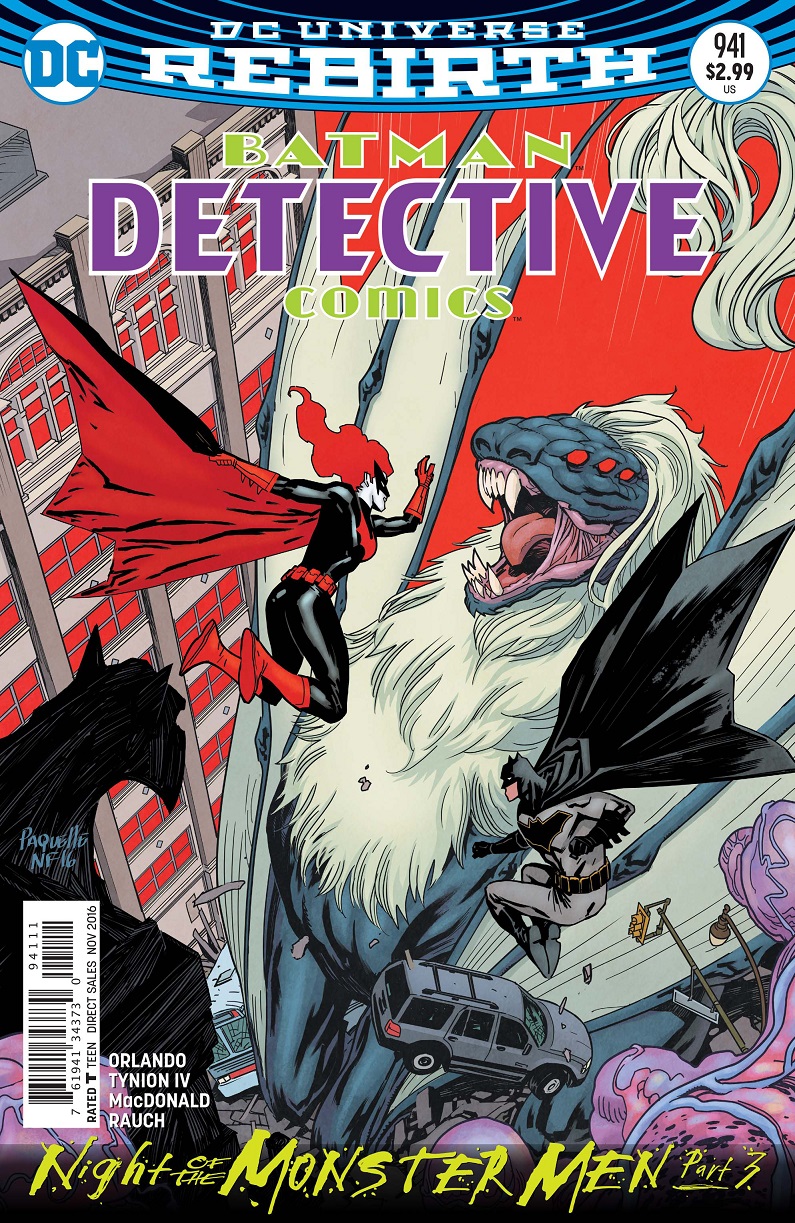 Night of the Monster Men continues and it finds the Bat-team stretched to their limits. Making matters a little bit worse is the fact that Gotham Girl has decided to get involved and at the moment, she is just a little bit unhinged as previous issues of Batman have come to show. Be that as it may, she is determined to help despite Batman’s protestations and unbeknownst to any of them; her actions while well-intentioned, are going to have a very negative side effect. Steve Orlando with a wee bit of help from regular writer James Tynion IV and artist Andy MacDonald create a very thrilling story, a tale that finds our heroes up against a threat they have never seen or faced before. Add to that a hurricane hitting Gotham at the same time and it all makes for a very overwhelming experience. What is most interesting is the portrait that Orlando paints of Batman. Normally he is fairly calm, cool and collected. In this instance, he is starting to lose it a little; he has no idea which way to turn because the threats that are making themselves known are coming from every direction. While Batman trusts his team, he has always felt it was his responsibility to look after them and to protect them no matter what. He feels this even more so now after Tim’s death and before that, Gotham’s. If he were to lose another person under his watch, it could very well break him. There are two people that are really holding it together quite well and that is Batwoman and Nightwing, the both of them used to intense pressure such as that which is currently rearing its head. The artwork by MacDonald is quite sumptuous, a perfect fit for a comic story about giant monsters and with John Rauch’s incredible palette, the book is simply beautiful. Though he was only in the story briefly, a real highlight is seeing Clayface as one of the good guys and using his powers in new and unconventional ways. Once again, the book is left on a fantastic cliff-hanger, one that will ensure you come back for the next chapter to find just what monstrous action will be taking place.

Captain America has a problem and as this is a Civil War II tie-in, that problem can only be Ulysses. In turn, Ulysses may soon find himself with a problem and that would be Captain America, soldier of Hydra, for if Ulysses and his power were to turn in Cap’s direction, then that would be bad news for all involved. Nick Spencer continues to weave his web ever so delicately as Steve Rogers must avoid detection by his friends and fellow heroes at all cost or risk what he is trying to build with Hydra to come crashing down around him. While in a perfect world, that would be the best outcome so that Steve could get back to righting wrongs instead of committing them, for now we simply have to sit back and enjoy where the story is taking us. Spencer also continues to pursue the history of Steve Rogers, specifically that time when he was but a child – a history that has been unexplored until now. It is a fascinating journey as it adds many different facets to his back-story. The one fact that holds true throughout all of this is that the Red Skull and Kobik altered Steve when he was rejuvenated during Standoff. As a result, one has to wonder if any of this past is what it seems, if there is any truth to it or if it is just a carefully constructed falsehood meant to endear him to the Hydra cause even further and give him a longstanding sense of loyalty. As it stands, these flashbacks are just as interesting, if not more than what is currently happening in the present. For the moment, Captain America’s world is a house of cards and for the moment, it still stands. One has to wonder though – for how much longer? There is quite the crazy ending, one that is sure to put the spotlight on our hero and if that light delves too deeply, this Civil War will turn into something else entirely.