With this issue, Jason Aaron finally brings us the history of the Empirikul and it turns out to be an epic affair. It has drama and action, high emotion and danger, magic and science and horror and all of that in only the first six pages. There is love and loss and you get the feeling that while the Empirikul might be doing what he thinks is right, he is also taking it way too far. The man is a zealot and as such, he has taken his crusade through dimension after dimension, laying waste to all of the magic and its users wherever and whenever he comes across them. As the recitation goes on, Dr. Strange and some of the more prominent magic users the planet has to offer are bound and awaiting what they must believe is their execution. Though they still feel a little hope, the group is helpless to do anything about it, at least until a rescue is made that defies everything that has happened as of late. While Aaron’s story keeps getting better with the stakes and the action getting bigger all the time, so too does Chris Bachalo’s pencils and designs, the book looking more fantastical and more incredible with every turn of the page. The entire opening sequence of the book was amazing to look at, extremely dramatic and if there had been no word balloons present, it would still have read the same, maybe even better as it would have lent a little more gravitas. If ever a musical score were ever needed for a comic, it is this one. One surprise that Aaron pulls out of the past is Shuma Gorath, a Doctor Strange villain – if he can be called as such, who is represented as more of a god than anything else. Once again, the Sanctum Sanctorum is like a character in and of itself as the Empirikul wish to destroy it, not knowing that inside is Zelma who may or may not be finding a means of holding them off. As seen previously in the series, the house has secrets of its own and almost a personality if it can be believed. Burning it down might be a lot harder than the Empirikul and his robots might think. Aaron and Bachalo have crafted a very edge-of-your-seat, nail-biting drama and the next issue cannot come fast enough. 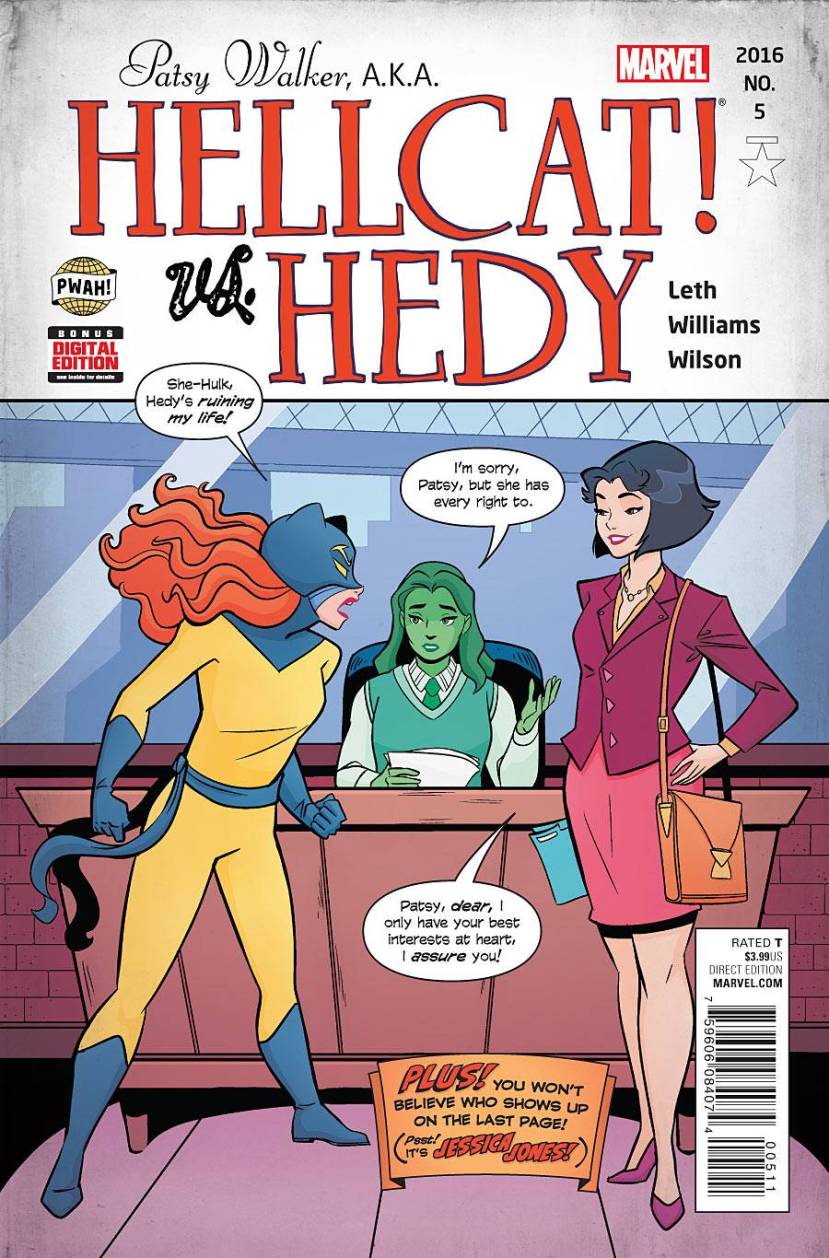 Hedy is not happy that Patsy is late to the meeting with the lawyers so that they might settle their disagreement over her comic book likeness. She-Hulk is not happy that Patsy is missing. Patsy is not happy at being a prisoner of Casiolena and Casiolena is not happy that Patsy and her friends keep making fun of her. Kate Leth and Brittney L. Williams pack this book full of laughs and though some might debate it, this is probably Marvel’s most enjoyable book by a mile. The last few years have seen Marvel take their B, C and D characters and breathe new life into them in a variety of ways and that includes their villains like Casiolena. Here, she is not the fearsome goddess that she most likely is, but a woman who feels she has been wronged and now that she is on Earth, she seems to have gone a little bit off-kilter by trying to recruit teenagers into committing acts of civil disobedience. Strange, but true. So while Patsy had been investigating and Valkyrie had come to give a helping hand, they managed to get themselves captured. Thankfully, Patsy has a lot of friends so they do not remain as such for very long. Leth creates these confrontations between characters in this book, usually involving Patsy, and it almost always degenerates into bickering which is far more enjoyable than the usual fisticuffs that normally take place. Watching anyone go at it like brother and sister or husband and wife is always a lot of fun and Leth has a really deft way with words to make it all seem very realistic. Williams whose artwork graces this book provides the reader with visual humour which goes hand in hand with the script and if it were anyone else, there is a good chance that this book would not work as well as it does. Suffice it to say, Kate Leth and Brittney L. Williams are a dream team and will hopefully be together for a long time to come. There is not so much a shock ending to the book as there is a surprise and it should make things very interesting for Patsy going forward. A perfect book on all fronts.