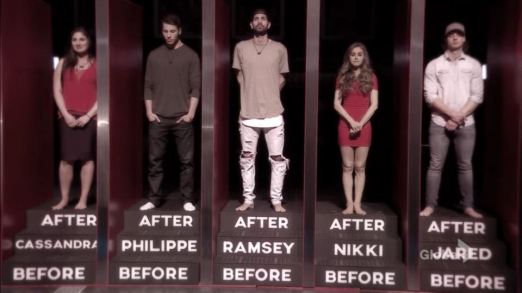 I swear, this show just gets better and better each week. Unlike the past couple seasons of the American version, big moves are actually being made and just about anyone in the house could win this thing depending on who wins HoH each week and more importantly, depending on the twist of the week. Last summer, I had strong feelings about who I thought would win the American version (I was wrong, but whatever). This time around? I’ve got no idea.

So the “mastermind” is out of the house, and no one seems to care except Nikki. Well, and Cerberus too, kind of, but only because of Mitch’s parting remarks. He’d said that if any of the trio makes it to the final, they’ll have his vote, and I honestly thought it was sort of a remark of respect, because they beat him. Apparently I’m naive, because Kelsey and Jared are pissed at what he’d said, because it’s put an even bigger target on their back. By saying they’ve got his vote, he’s motivated the others in the house to get rid of them, which is true, though I will say that I’m pretty sure they were already motivated after the confrontation Mitch started when he let Maddy and Ramsey know what Cerberus really had planned. Their game was more or less blown up after that conversation.

The HoH challenge continues on from last Thursday, and just to recap, Phil and Ramsey are both out almost immediately. Phil just made a really stupid mistake, but apparently Ramsey was all about throwing the challenge. He’s confident that whoever wins will target Cerberus, and he doesn’t want to be the one to have to do it, so he’ll just let the others do the hard work. Except, Kelsey and Jared are still competing! WTH, dude! You don’t throw the challenge until after your opponents are out! Especially when you know that you’ll probably be the target if one of them wins!

But it turns out there’s nothing to worry about, as in one question, everyone but Maddy is eliminated. So Maddy is HoH! This freaks everyone out. Maddy is a real loose cannon, and no one knows where she’s going to aim. And that’s just the way she likes it. She wants everyone to be on edge. She isn’t going to give up her strategy to anyone, apparently not even Ramsey. I have to say, she’s fun to watch, because she’s somewhat diabolical in her scheme, but man, I’d be terrified if I were in the house with her. After all, she did boot out her own alliance member a couple weeks ago. Who knows who she’ll target next.

Among the most nervous are Kelsey and Cassandra. Maddy flat out told everyone that Cassandra would be her target if she ever became HoH again, but then, that was before Kelsey came back into the house. And everyone can see that Cerberus is a real force in the house. Mitch may have been making up the numbers last week, but it’s definitely true that the three of them have a higher chance of winning than the rest, and if the others don’t get rid of them, they’ll be harder and harder to beat.

Just about everyone tries to get information out of Maddy as to who she’s going to put up on the block, but she just bluntly tells everyone that she wants everyone to be scared because they’re all her targets. That’s kind of evil! I’m not a Maddy fan, but I have to admit, I kind of respect her game right now.

And Cassandra isn’t completely out of the woods. She’s apparently target number one for Ramsey, who tries to influence Maddy to do his bidding for him. I know these two don’t like each other, and I know that he and Jared have a secret alliance, but I’m a little surprised that he’s that adamant that Maddy go after her. If he wants to work with Jared, it would be in his best interests for Maddy to go after Kelsey and Raul, not Cassandra. Not that Maddy is going to let him sway her anyway. As soon as he starts to pressure her into nominating Cassandra, she shuts him down. I think she’s a little abrupt, but she gets her point across. I guess there won’t be much cuddling between these two tonight.

Cassandra is worried too. She urges Tim to get close to Maddy to try to save her, and Tim, rightfully, tells her he won’t try to move on in Ramsey’s territory. He and Joel both inform her that she’s overplaying and that she needs to lay low and not be confrontational with Maddy. (Kelsey gets the same pointed advice from Jared). Tim’s got her covered anyway. He’s become Maddy’s mentor – just about everyone’s mentor, actually – and he shows her the importance of making a big move. If she makes it to the end, she needs to show the jury that she’s made some tough choices to get her there. And that big move is to nominate two of the three heads of the monster. This is a brilliant move on Tim’s part. Not only is he basically just saying what everyone else is saying, but he’s also taking the focus off of him and Cassandra and Joel (who are in a secret alliance. Shh! Cause no one else knows!) He’s doing what Mitch had been doing before he’d been found out – controlling the house in the most subtle way possible. I honestly don’t understand how no one can see what a big threat Tim is. It’s as if they’ve forgotten that they can win this thing too. I totally respect the way he’s playing the game. There’s a reason he won in Australia.

This week, to determine who will be the Have-Nots, the house guests participate in a slop vote. Containers with all the houseguest’s names occupy the living room, and one by one, they have to distribute a bucket full of slop into the containers of the people they want to be Have-Nots. Most of the decisions are predictable, but there are a couple surprises. Jared gives some to Raul. And Tim and Cassandra give their whole bucket to each other. It’s kind of funny. And just about everyone gives some to Nikki, since she’s the only one who hasn’t ever been on slop yet.

It’s revealed that the three people who have the most slop in their containers are Nikki, Kelsey, and Raul. Kelsey takes it well, but Raul and Nikki are both absolute drama queens about it. Not super surprising, but it is annoying. Both of them take it so personally, both so offended that people would choose them. That’s the way the game works, guys – taking everything so personally will only turn more people against you. Nikki throws tantrums for the smallest things, so this really isn’t out of character for her. In fact, it’s a source of entertainment. Raul, on the other hand, is just annoying. He’s clearly the type of person who is used to getting everything he wants, and when he doesn’t, he pouts. These people drive me nuts.

At one point, Jared decides to go talk to Maddy, and she assures him that Kelsey will be on the block next to either Nikki or the brothers. When he asks her why she doesn’t like Kelsey, Maddy is honest – Kelsey is a mean girl. She pretty much says the same thing right to Kelsey’s face, something Kelsey doesn’t take well. She goes off a little on Maddy, voicing her frustration about being targeted, but Maddy isn’t ruffled by the outburst. She stands her ground, which clearly isn’t okay with Kelsey.

She’s another one who is used to getting what she wants and does not seem to understand why everything isn’t just falling into her lap. Let’s face it – she’s hot, so she’s probably used to people falling all over themselves to get to her. That isn’t happening here, and she doesn’t seem to know how to handle this lack of power. She does throw Raul under the bus to Cassandra though, pointing out that he’s won a challenge, so why is she the target instead of him? This is some friendship, Kels.

Jared throws Kelsey under the bus a little too. He and Ramsey are secretly working together, and when Ramsey tells him point blank that Kelsey is holding him back, he agrees. They’d had a great thing going when Kelsey was gone, and now that she’s back, everything has gone back to the way it was before, and that sucks for just about everyone.

So now we get to the nominations. On her short list are the brothers, Kelsey, Jared and Nikki, because she’d be the ultimate pawn. I immediately hope that Nikki doesn’t go up on the block. She had a breakdown over having to eat slop for a week. I don’t know if she’d be able to handle going on the block too. But I don’t have anything to be afraid of, as Maddy nominates Jared and Kelsey. She also tells them straight out that she can’t wait for them to campaign against each other. They’re clearly taken aback, and so am I. Sometimes speaking your mind is a good thing. Sometimes, it’s too much, and this is one of those times. I really can’t stand Kelsey, but I don’t think this last bit needed to be said. It just shows Maddy to be a mean-spirited person.

I do, however, think she made the right choice in nominating these two. Jared needed to go on the block, because he’s probably the most likely of the three to win the PoV challenge. Raul probably would’ve been a better bet to put up on the block than Kelsey, but either way, I think Maddy’s choice was solid. Unless Raul wins the PoV, one of the trio will be evicted for sure, and I think that’s fantastic.

What did you guys think of the episode? Who do you think is playing the best game so far? And who do these guys need to really watch out for? Let me know! And I’ll see you on Wednesday!