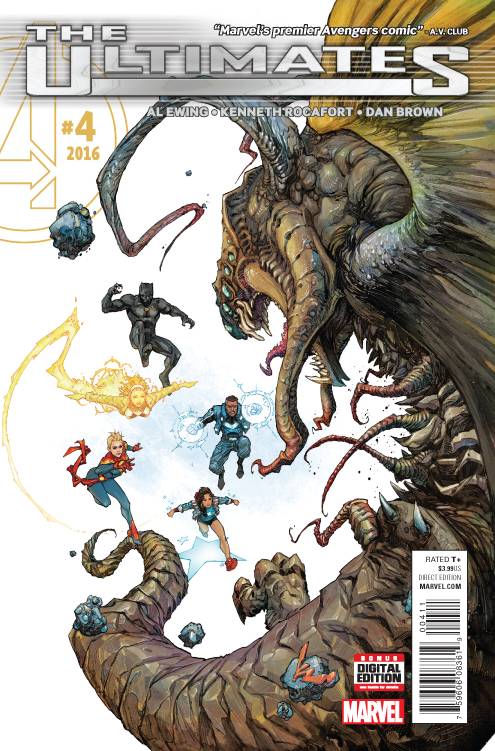 Heading out towards the edge of everything in the hopes of repairing the timestream, the Ultimates make a startling discovery – the body of a man whom Blue Marvel thought was destroyed long ago and of course, alive and as well as it gets. So it is that Al Ewing and Kenneth Rocafort give us a little history on the relationship between Adam Brashear and Connor Sims, Blue Marvel and Anti-Man respectively, and how they came to be. The two are shown to have a long history and friendship together, one that has lasted through wars and career changes and it is not until a science experiment goes wrong that things finally start to drive them from that path. When Anti-Man had killed Adam’s wife, Blue Marvel had thought in the aftermath that he had gotten rid of Connor Sims permanently and yet as history has proven, Connor will keep showing up whether Adam wants him to or not. This time is one of those moments where the last thing Adam ever wanted to see out in the literal middle of nowhere was the man that killed his wife. So with this revelation, if it can be called that, Blue Marvel is about to do what he failed to before and he is only stopped by the appearance of his son Kevin who reminds him of the Ultimates’ mission – to fix those things that no one else can with Anti-Man being a perfect example of one of those very things. Up until this moment, the book has been focused on introducing the team to the reader and it has done an excellent job of it, but even so, Ewing takes time out to shift the focus squarely on one of its most powerful members, the hero known as Blue Marvel. Though the man features prominently on the team and the Mighty Avengers before this, he has not gotten the spotlight in quite some time and so it is nice to see Ewing and Rocafort with his amazingly detailed pencils take a look at the man. So where the book goes from here and if there is a chance that Anti-Man can be rehabilitated, his powers controlled and the man forgiven, it would be very interesting to see him join the team though it is quite likely that it will not happen.

The adventures of Red Wolf who is now a man out of his time continues courtesy of Nathan Edmondson and Dalibor Talajic and it also continues to find our hero quite confused. To play that up, Edmondson and Talajic not only focus on the obvious things that might confound a man from a hundred years previous, but on the minute, such as having a telephone or social security number or the simple fact that coffee can be served in something other than a mug. Those little things not only proved a few chuckles but make for some of the best scenes in the book, lending charm and authenticity unlike other stories with a similar plot device. Most of the issue is spent with Red Wolf accompanying the sheriff whenever he goes, as for the moment, Red Wolf does not seem to pose a threat and the sheriff thinks that he might have amnesia. Though Red Wolf might be a little bewildered still, Edmondson continues to have our hero prove himself an invaluable aid to the police and quite possibly, no more so than the cliff-hanger the book is left on. While the book reads well and is drawn quite fantastically, and despite the fact that it keeps you interested throughout its length, it is a slow burn type of tale. There is little excitement and only a very wee bit of action and yet, you find yourself immersed in this story not only because you know something big will happen at some point, but because of the latent suspense that is present in every chapter. What that big something might be is anyone’s guess, yet while Edmondson might seem like he is taking his time in the getting there, you cannot help but be pulled along in this very successful comeback.