There is rarely a time when Dan Dailey does not bring a smile to your face. The man was charismatic and so full of life on the big screen no matter what the role and the same holds true here in A Ticket to Tomahawk. Classified as a western-comedy, the film is indeed both with Dailey serving up a couple of songs just for good measure. A few tend to think this is a musical, but the amount of music is minimal and tends to move the story along instead of being just standalone numbers. 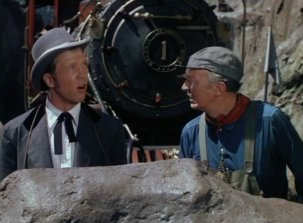 Joining Dailey in this adventure is Anne Baxter as the female lead and love interest and she adds just as much charisma and charm to the movie as her male co-star. Walter Brennan, Rory Calhoun, Charles Kemper and Marilyn Monroe in a bit part additionally star and the film tends to be more comedy than anything else with the laughs coming from every direction.

Boiling it down, the film is about a train called the Tomahawk and its first run which also doubles as a mission for the railroad to ensure their franchise lives on, meaning it has to make it to Epitaph before a certain time or the railroad has to find another way to go.

Of course, there are all sorts of problems that arise, one being gunman and another being the fact that the line has not even been finished yet and they will have to find some way to get the train over the ground without any track. Dailey plays Johnny who is the first passenger to ever ride the train while Baxter is Kit, a newly made deputy by her grandpa to escort the train and Johnny to its final destination.

Everything that can go wrong does so and it is up to Johnny and Kit to find a way to deal with it and as such, brings about the primary plot which sees the two fall in love and it too is quite comedic to watch as Kit is so inexperienced in the ways of not only love, but of being just a girl while Johnny is so worldly.

Along the way the companions run into a group of Native Americans whose chief thankfully knows Johnny from a previous life, so to speak, and a group of chorus girls who include Marilyn Monroe among their number. They perform a song to which Dailey soon joins in and Monroe’s part, while small, gives her a few moments to shine. She has little dialogue and if you were watching the film at the time of its release, you may not have noticed her whatsoever, but due to her popularity in the intervening years, she is impossible to miss. As a whole, the showgirls do not play to integral a part, though they do teach Kit how to act more woman-like during one scene which brings a smile or two to the face.

A Ticket to Tomahawk is perfect matinee fare, meaning though it is quite a good film, it is the kind of lighthearted fluff that does not usually make it to the top of anyone’s must-see list on a Saturday night. That being said, you will not be disappointed in watching this if you are looking for something to lighten the mood or provide a few laughs.