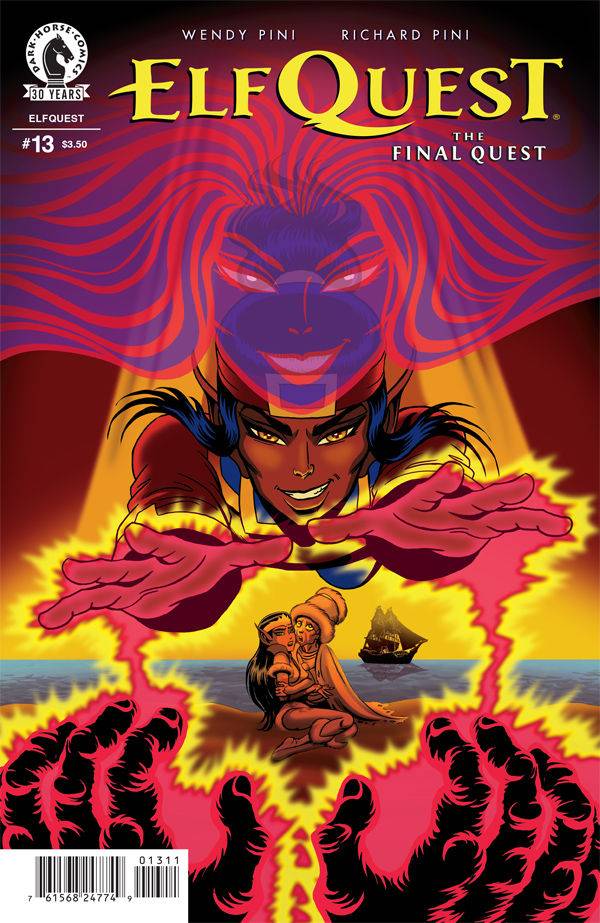 Angrif Djunn’s forces have landed and the biggest mistake they could have made was to encounter Rayek and take a shot at his daughter Venka.  Unknown to them, Rayek holds captive within himself the most evil and most powerful of his kind – Winnowill.  So it is that Winnowill works to get free of her prison while Rayek wreaks vengeance upon the humans and the elves have no idea now that Rayek has cut loose, if he will be able to contain her any longer.  The Pini’s up the action significantly in this issue, but just because they do so does not mean they ignore the rest of the cast either.  Due to recent revelations, Cutter has left the elves behind and has become wilder and more feral than ever before.  The news Cutter received was shattering and though the rest of the tribe has no idea what it might be as of yet, they head off in search of him knowing that not only do they need him, but he needs them.  There is a glimmer of hope for the elf chieftain though as Filcher, his wolf, has caught up with him and provided a bit of calm within the storm.  One of the more heartbreaking things about the book is just how much everything has affected Strongbow, namely Moonshade’s decision and then Cutter’s leaving.  It will be interesting to see if he should ever become himself again as so many things have changed within the tribe.  The Pini’s also give the Djunn’s men a lead as to where the elves might be located and once the humans manage to find the palace, and find it they more than assuredly will, it should provide a final resolution to the conflict between the races though the toll might be higher than either side can handle.  Like many adventures, The Final Quest keeps putting hardships in the way of the elves and it makes for a very entertaining time as they usually shine best when adversity faces them. 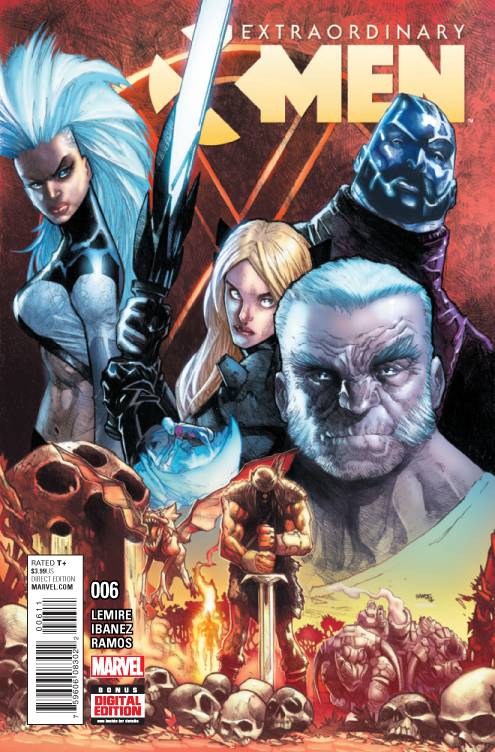 Like nearly every other Marvel book of late, Jeff Lemire takes the X-Men to Weirdworld because – why not?  Thankfully Lemire is able to work it into the story naturally and it does not seem out of place for the team to do so.  The story finds Illyana talking with a new mutant named Sapna, a girl who seems more at home in Limbo than anyone else and probably more than she should, but her powers make it so and she reveals to Illyana the existence of portals and other realms and so it is that our heroes head on over to Weirdworld.  There is of course other things going on like the drama involving Nightcrawler who has retreated within himself due to the trauma he suffered, the awkward scene between Iceman and Anole and the new roles that some of our characters are taking on such as Colossus as teacher and Storm as the replacement Cyclops.  The latter is perhaps the funniest thing to see in the book at the moment and it is sure to be addressed at some point but for all of Storm’s complaining and opposition at the way Cyclops did things, she is starting to turn into the man, slowly but surely.  Heavy is the head that wears the crown as they say and Storm, though she has led the X-Men before, has not been burdened with their entire survival riding on her shoulders.  Leading a mission and leading a people are different things as she will soon find out.  Logan has a couple of good moments in the book as he is not only feeling his years, but has assigned himself as Jean’s protector.  That in particular is a good thing and really gives the book a sense of legacy and familiarity due to their shared history, which at the moment, only Logan knows of.  There is a reveal at the end of the book which is the entire reason that the team is in Weirdworld and not only was it pretty unexpected but it should make for a very intriguing confrontation.  With some solid artwork from Victor Ibanez working itself into this issue and with a solid story by Lemire, Extraordinary X-Men continues to be the best X-book on the stands today.