Losing one’s memory has to be one of the hardest things to ever go through, not to mention one of the scariest. Whether it is all of a sudden or a slow decay through the years, forgetting what you know about yourself is not something you would wish for yourself or on anyone else. For Chris, it is utterly frustrating as he tries to retrace his steps to discover who he is and to find out who the woman from a torn picture that he has in his possession is. Having been in a terrible automobile accident, the man has amnesia and as such, wants to know what happened which he can only do if he manages to figure out those two things. Who is he and what has this mysterious woman have to do with anything, why does he have her picture and what happens once he finds out? 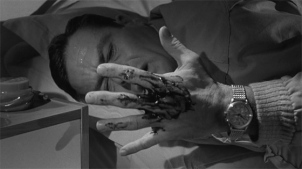 This Freddie Francis-directed picture for Hammer Studios, with a script by Jimmy Sangster, is a whodunnit without a body, at least at first. There is a mystery that starts to take place from the very beginning of the movie and it starts to build from there as our protagonist sets off on his journey. Once Denise, the woman he is searching for makes her first appearance, the suspense starts to kick in and from that moment on, the viewer will find themselves wanting to know more about what is going on just as much as Chris does. Robert Webber is the lead actor of the film and our man of mystery and he does a good job of it, balancing his feelings of frustration, indignation and curiosity. What is quite interesting about his character is how he progresses through the film, specifically how we see him.

At first he seems like an affable guy, a man who just wants his life back. Towards the middle of the film when we are shown his past through a flashback and you start to dislike him as he is really not the nicest of persons and yet towards the end, you are brought back around to liking him again when everything starts to come to a head and is finally revealed.  He may not be the most upstanding of gentlemen, but in this film, there are people that are worse.

There are some other fine performances in the film, specifically Lelia Goldoni as model Denise, the woman Chris has been looking for. She is gorgeous and she knows it and uses it to her advantage when trying to handle Chris throughout the movie, like a spider luring in its prey. Anthony Newlands and Jennifer Jayne also star and almost stealing the show is Maurice Denham as the very polite, private investigator. Shot in black and white, it helped to enhance the mood of the picture, almost as if the viewer were seeing the world as Chris would see it. There was no horror to be found, though losing one’s memory is frightening in itself. Ultimately, this is not one of the best movies to be released from Hammer, with the jazz music that plays throughout seeming a little out of place at times and its Vertigo-esque opening reminding you of Hitchcock, but overall it keeps you captivated which is a good thing. Hysteria will never bore you, but it will never wow you either. What it does happen to be is a fine little mystery-thriller that shows you what can be accomplished on a minimal budget and with good talent.