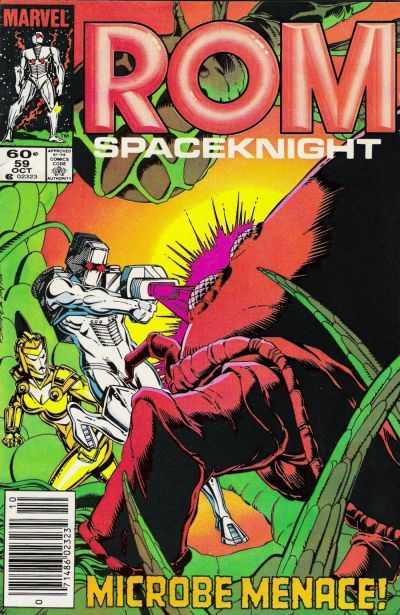 The Wraith’s sorcery is persistent and vile and it seems like it will be almost impossible to be rid of unless something immediate can be done to stem its tide. Thankfully Rom and Starshine have the use of Ant-Man’s Pym Particles so that they might shrink down to the sub-atomic level to root out the cause of the disease. It is a wonderful journey as drawn by Steve Ditko and Bob Layton and seeing our heroes shrink down further and further discovering world upon world the further they go is something this book has never done before. Another thing that this story does is to explore the humanity present in our heroes, specifically Rom and Starshine. Bill Mantlo weaves a story that not only sees the two of them battle Wraith magic, but explore themselves and who they are as they do so. Rom sees all life as sacred, whether it is the ant, the mite upon the ant or anything else that holds a heartbeat. For Starshine, she still holds a lot of rage within her over the traumatic loss of her friends and family. She is astounded by the fact that Rom can act as he does and that even after two hundred years, he still has such a positive outlook on everything, that he can hold onto his humanity no matter what happens. It makes her reflect upon her current attitude and the way she has been looking at life and she thinks that maybe she should let the anger go. Whether that happens or not remains to be seen, but this incident may just be the turning point in Brandy’s life. Come the end of the issue, the day is saved, which is a good thing and on top of everything else, there is Rick Jones too. All in all, a very solid issue that should cap off the adventures of Rom in Canada.