Films are often successful for a variety of reasons and this film, like every film, is exactly the same. Three reasons stand out though more than any other – Marilyn Monroe, Tom Ewell and Billy Wilder. Together, the three of them would make movie magic and create not only one of the better films of the 1950s, but it would also be one of the pictures that many would associate with Monroe whenever they talked of her over the years that followed. The film is a comedy, the sort of comedy that Monroe was more famous for than anything else where she played the blonde who is sort of oblivious to everything around her but is wiser than anyone ever gives her credit for. She is of course a beautiful woman, the kind that stops men in their tracks which is exactly what this movie plays on to generate some of the laughs present. The rest of them come from Ewell who reprised his Broadway role for the film and maybe because he had portrayed the character so many times before, was an absolute genius onscreen.

It is fitting then that Ewell starts the film off and while some might think the picture is about Monroe’s character, because of the association the movie holds, it is actually about his character, Richard. It finds Richard all alone, his wife and child off on holiday for the summer and him not really knowing what to do with himself. There is a lot of outward exposition as he talks to himself, trying to while away the time until his wife calls and hoping that he can keep himself out of trouble until they return. Once Monroe rings his apartment though, all bets are off and Richard can hardly contain himself between wondering what his wife is doing, the fear of losing his wife and wanting to impress the new girl who has no clue just how crazy she is making him. 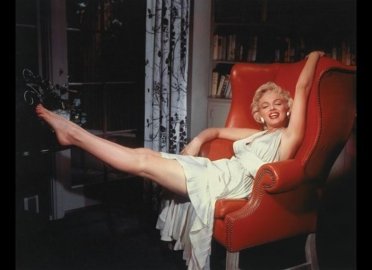 The great thing about this movie is that while it takes place during the 1950s, almost all of it is still relatable. Being relatable keeps the comedy fresh and current because when it comes to men and women, not much has changed over the years. Billy Wilder knew that when he helped write the film with George Axelrod and that is probably one of the reasons, or the main reason that Monroe’s character does not have a name. The simple fact of the matter is, it does not matter whatsoever what her name is. Monroe plays the fantasy, the girl that every man wants and very few can have, the one they dream about as they get older thinking about what could have been.  Richard has the Seven Year Itch, or at least so the book he is editing claims. He has been married for seven years, he finds himself at a good place in his life and yet he is creeping up on his fortieth year and while he thinks he still has it, there is also doubt that he does not have it and that women may not find him as attractive as he once was. Maybe he is restless and maybe he is not, but being away from his wife and his son and having a new girl move in upstairs that looks like Marilyn Monroe is not doing him any favours. Monroe for her part, is fantastic and as far as analogues go, she fits the bill to a T. 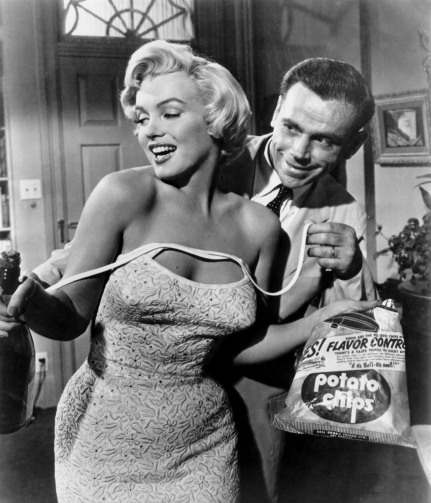 There are those that say Richard and the girl should have had an affair, that he should have slept with her and while that might have added many different layers to the character of Richard, the film still works as it paints him in a positive light for not doing so. It is possible that the film could also have been much stronger if he had, exploring avenues not taken, but in the end it might have taken away what charm there was, and instead of making Richard a comical, likeable guy, he could have went from hero to villain. As it is, the film obviously did not go in that direction and what it ended up as, became history.

The most iconic moment in the film is that where Marilyn’s skirt blows up from the subway. It caused a happy stir with the public and those that saw the film loved it, everyone but her husband Joe DiMaggio at the time who did not want everyone seeing what she had to show, even though there was literally nothing to see. Suffice it to say, it is still one of those big cinematic moments even all these many years later, only because it did become so iconic. It is hard to say if this film would have been as successful if any one of those key players had been missing. It would definitely not have been as popular without Monroe as Ewell was not as well known in the film world as he was on Broadway, and if Wilder had not been present to bring it to life, it is hard to say if anyone else could have done as much justice to the material as he had. Suffice it to say, if you are going to watch any Marilyn Monroe picture, this is one that is a must and if you are just looking for a good movie period, then this film will do you just fine.