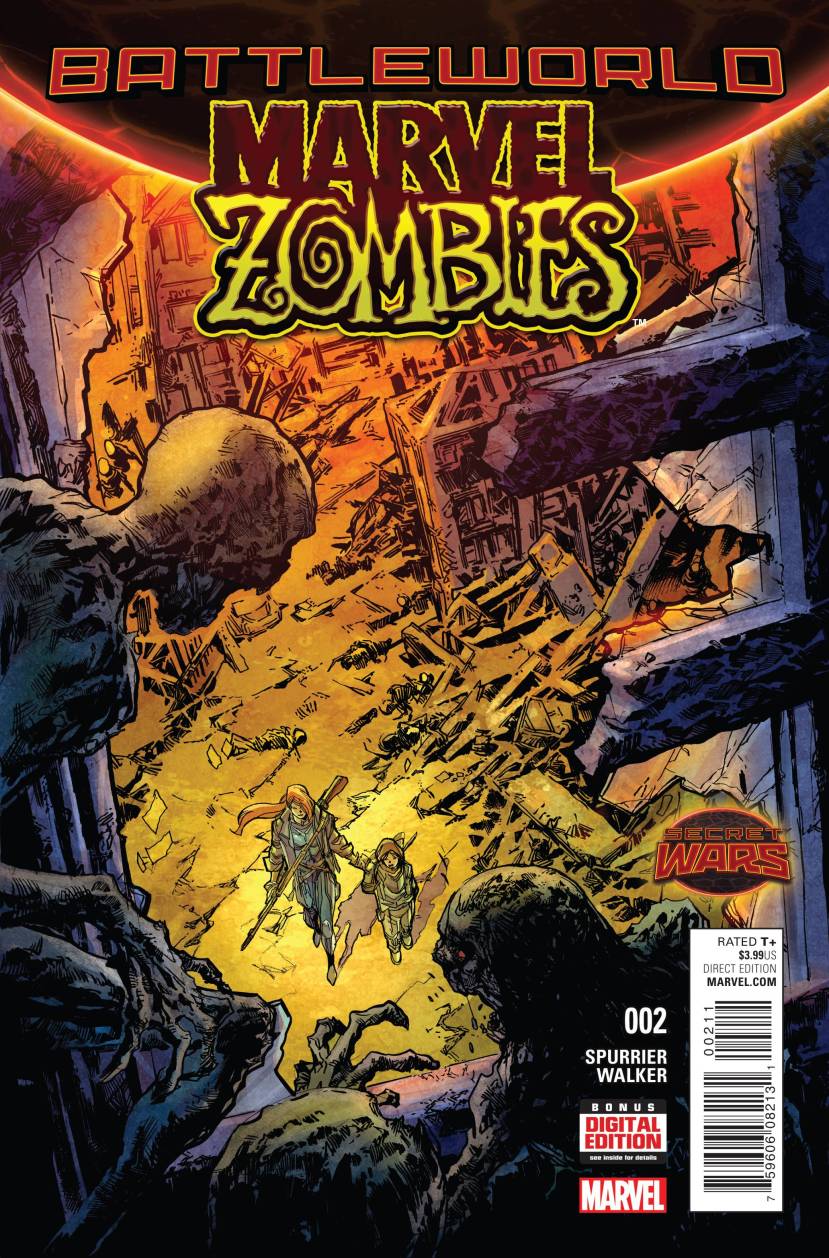 Elsa Bloodstone still finds herself behind the Wall in a land filled with zombies and more. Not only that, she is saddled with a child of which she has no idea what to do with and all she can remember is her own troubled childhood with her father which does make for a very good learning curve. Simon Spurrier and Kev Walker deliver another fun-filled issue of Marvel Zombies starring everyone’s favourite monster-hunter as she tracks a zombie hoard while also being tracked herself. There are some cool, undead versions of characters that seem more than familiar, like MODOC – the Moribund Organism Designed Only for Cannibalism – as well as a couple of Saurons and Carnage. Of course, there is a character that makes an appearance on the last page who just had to make himself known, but when you think about it, it kind of makes sense in a way. The best parts of the book though are the flashbacks as they provide some great characterization for our heroine and it gives the reader context for all of the decisions Elsa is making in the present. Elsa had it rough, though not so much as some. Her father Ulysses may not have seemed like he cared, though he probably did in his own little way, but he prepared her for her role in the world and for her inheritance and that has to count for something. The flipside to all of that though is, should she have had a normal childhood, where would she find herself now and would she be any happier? The story is still left wide open, with anything being possible though Elsa manages to find herself free of constraints by the end of it. There is a villain reveal, along with the other character reveal and it should make things pretty interesting, though again, it is hard to say what will happen, but with Walker and Spurrier on board, it should be fun.

The creature that kidnapped Dejah Thoris stands revealed as a Hormad, a Frankestein’s Monster-like type of being that is artificial in nature. It is also one that much like the monster, realizes that it does not want to be alone. For that reason, Dejah finds herself a prisoner and she is not alone as there are many other women all awaiting the same fate as she. Thankfully, Dejah is an incredibly able woman, one who is not afraid of very much and one who is as smart and capable as anyone. It does not hurt either that John Carter has come to her rescue and together, they take on the Hormad. Ian Edginton and Ron Marz wrap up this quick little tale and it was nice to see that it was not going to be dragged and padded out for the sake of collecting it into a trade. It was fun, adventurous and to the point which is how most comics should be written. While the book might have John Carter’s name in the title, Dejah Thoris plays just as important a part as that of her husband and it is good of Marz and Edginton to realize that and not have her as just a part of the background but play an active role. Another good thing about this book so far is the variety of tales showcased thus far and it will be exciting to see what comes next. Ariel Medel and Nanjan Jamberi provide some pretty good artwork and altogether, they and the writers make this a book worth picking up month in and month out.