Sorority House Massacre is as formulaic a slasher as they come. One can pretty much guess what is coming next at any given moment during the film and it lessens the impact of what actually does happen simply for that fact alone. But, despite all of that, the movie still manages to entertain the viewer a little bit, even those horror aficionados who think they have seen it all before. It is not the story that keeps you glued to the screen so much as the combination

of it and the direction by Carol Frank, who also actually wrote it as well. So while it was overly familiar and clichéd, it was at least put together quite well.

The story sees Beth having nightmares of a forgotten trauma which then queues up the scene where the crazy guy escapes from the asylum. Slowly Beth starts to remember as the bodies start to pile up until finally, the mental block disappears and she remembers who it was that murdered her family when she was little.

As the film takes place primarily in a college where Beth joins a sorority, there are a bunch of flighty-type 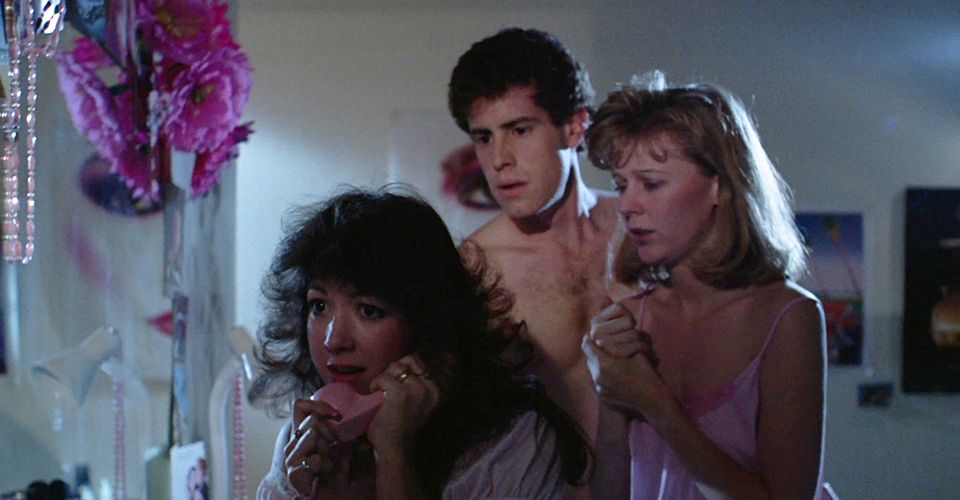 college girls and while there is no token pillow fight, there is a scene where they dress up in another girl’s clothes which also provides the film with its quota of nudity. Be forewarned when watching this film and know that all of these girls have terrible 1980s hair as well. The actress who plays Beth, Angela O’Neill, is not the most charismatic of actresses and seems a little lifeless in the role. Some of it can be chalked up to her character being plagued by nightmares of a killer and all the bodies that fall around her during the film, but she just did not capture the imagination like other scream queens did from movies gone by.

There is a little blood, though not overly much and a little tension to drive the pace forward but for the most part, this movie is quite forgettable. Sorority House Massacre has a great title and it is not a terrible film, it just has little else to really make it something special. If you have seen one you have seen them all is a phrase that is almost apt in this case, but if one finds themselves new to the genre, then they just might enjoy this picture.