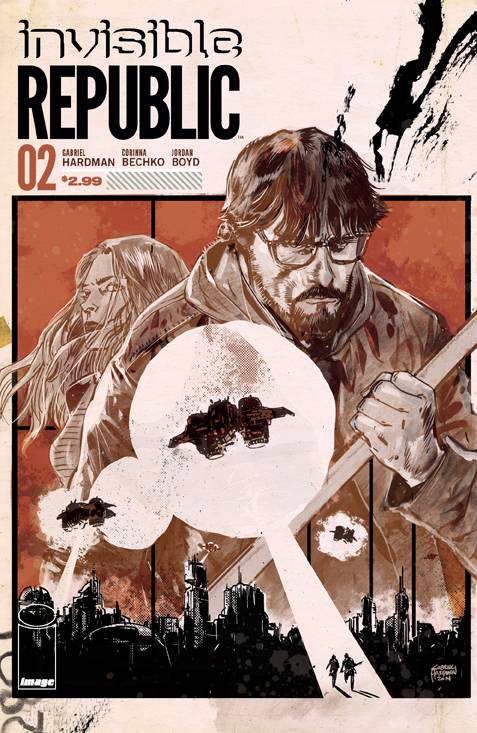 Croger Babb is looking to write a story, one that will save what little he has left of a reputation and after finding a journal by a woman named Maia Reveron, he thinks he might be on to one of the largest stories of all time. It also happens to be the story of Arthur McBride, the fallen leader of the Malory Regime and Babb knows it is going to be big as there are people out to stop him. The problem now is how to go about getting all the facts and how to stay alive while doing so. Gabriel Hardman and Corinna Bechko deliver a solid second issue of their new science-fiction title from Image Comics and it not only follows Babb as he goes about his job, but also flashes back to Maia and her cousin Arthur. After killing the soldiers last issue, the book sees Maia and Arthur make their way into town and try and look for work. But as events unfold, it is obvious that whatever plans the two might have made, are not going to work out how they thought they would. We get to know a little more about the two as well as the book unfolds and you can see how Arthur could and does become the ruler of the people in the future of this title while you can see Maia becoming his opposition. She already does not approve of what they have done and what he has made her try and do. Babb on the other hand is a man that is not desperate per se, but he has nothing left. His reputation as a journalist is all but ruined and he has nothing else in his life at the moment. Finding that journal could be the start of something new and if he can get this story off the ground, no matter how many hoops he has to go through, it will be worth whatever the cost. Set against the backdrop of a planet in turmoil after the loss of its leader, Invisible Republic is a fantastic new book that you will find hard not to find utterly compelling. 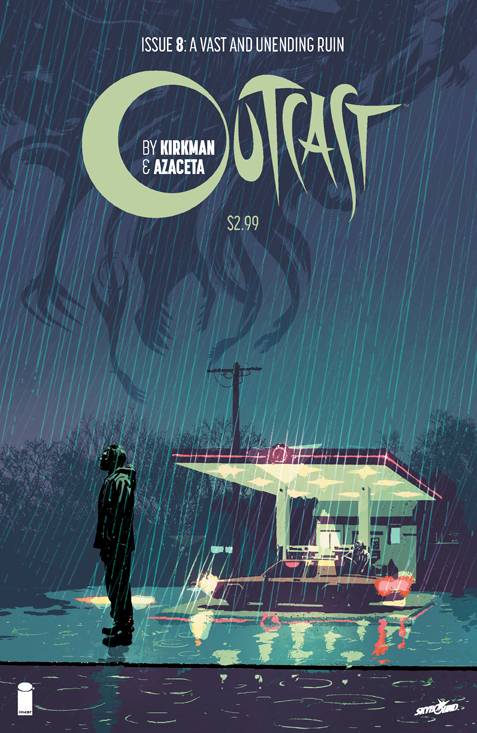 Outcast by Kirkman and Azaceta #8

Kyle and Reverend Anderson are making the rounds, trying to see if all the exorcisms that the Reverend did on his own over the years have been successful because he doubts that they did. As of late there have been a lot of people being possessed and it suggests that there is something bigger going on. As the Reverend and Kyle start their investigation they discover that what might have been deemed fruitful before may only have appeared to be so on the surface and that the demons that resided in those poor people the Reverend helped are still in fact there. Outcast continues to be a very slow burn, but one that seems to really be building into something as it goes along, though just what that might be is known only to Robert Kirkman and Paul Azaceta. Obviously with such a large infestation of demons there has to be a larger plan in play and it must also have to do with Kyle specifically and to a smaller extent, Reverend Anderson. The artwork by Azaceta and the colouring by Elizabeth Breitweiser continue to paint a very moody portrait and it is suits this tale of demons and exorcisms perfectly. With every passing issue, the Reverend is starting to doubt his effectiveness in battling evil more and more while conversely, Kyle’s confidence is improving with every passing day. Kyle wants to do this, to take care of these demons once and for all, not just because of his past but because he knows that it is the right thing to do and as he gets stronger, you can also see that Kyle is getting just a little bit frustrated with the Reverend and his weakness. Creepy, eerie and just a little bit disturbing, Outcast continues to be a horror that does more than your average blood and guts book.