There is nothing quite like watching a movie from the slasher genre.  They are almost always entertaining no matter how much alike they might be or how poor in quality including this very film from 1982.  There is very little plot, very little story and yet you cannot help but have a good time as scantily-clad women and their macho boyfriends get killed off one by one in ways both gruesome and cruel.  Slumber Party Massacre is famous for introducing the world to the man who prefers killing with a drill and he does so in a number of different ways including the eyes, chest, neck, and so on.  You have to give the guy for credit for being inventive at least.  The movie, while not the biggest hit would go on to score two more sequels bearing the same name as well as two more later called Cheerleader Massacre which had little to no resemblance to the previous three unless you count the nudity and the killing.  In that case, almost any horror movie could be related to this one then.

There is a little tension and suspense throughout the film as you never know when the killer is going to strike and that is where the horror comes into play.  The killing itself is not what makes it frightening, in fact it is almost quite comical most of the time as it is so ridiculous.  The real scares come from the fear of the unknown.  The killer known as Russ Thorn is on the loose and yet you never learn the reason why he is doing this and there is no way he is going to stop until he accomplishes whatever goal he has set himself or until he himself is killed.  That does not last for long though as again, the situations are simply absurd and the way these men and women tend to run into his drill while he just swings it here or there is laughable. 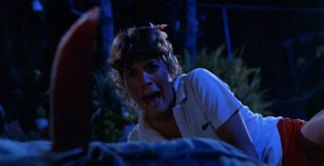 Surprisingly the acting is not all that bad and while not great, the various players do manage to hold your interest and you tend to believe that they themselves are frightened as they scream and run and die.  And there is a lot of running and screaming and dying yet unlike many slashers or horror movies of the time, very little nudity.  It was not disappointing, simply unanticipated.  There was a little, just not a lot and if there is one thing you can usually count on a slasher movie for, it is the killing of naked women.  Still, it did not hamper the enjoyment of the movie in any way and was actually a little refreshing to see a film not rely on naked women to capture your attention.

Slumber Party Massacre for all intents and purposes has become a classic of that little horror sub-genre called the slasher film.  This one is even more so due to the fact that it not only features a lot of killing and gore, but mainly due to the humour present throughout.  It is not the kind that will make you bust a gut, but it will have you smiling.  The best way to describe this film is fun, or at least as much fun as one person can get watching young women get massacred on-screen. 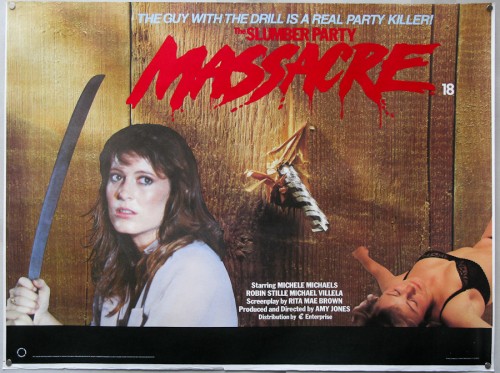