Sam Wilson is not having the easiest time of it.  Not only has he had to deal with a ton of villains, losing Nomad and taking out the Red Skull’s daughter, now he has to face Baron Zemo himself and finds he is no match for the man.  In fact, as the issue opens, Zemo has a sword pointed directly at Cap’s heart with only Sam’s hands in the way to prevent it from going in.  Luckily, from somewhere, Sam manages to pull on everything he has to turn the attack away and get the upper hand and ultimately save the day.  At least for the moment that is.  The differences between Sam Wilson as Captain America and Steve Rogers as the titular hero are great and varied, but none so much as when it comes to what each of them can do.  Rick Remender proves that to great effect when Sam uses his powers, that of his being able to converse with birds, to prevent a catastrophe involving millions of infected fleas from making the populace of Florida and more, sterile.  It was a situation that Steve Rogers would have been unable to stop and it once again goes to prove that elevating the Falcon to the big leagues was worth it.  There is a big surprise in the book, as someone who was thought to be dead is not, but there is also a bit of tragedy as another loses their life.  In fact, the death that this book features is so unexpected, it really hits home for those that can relate.  Not to be a book completely reliant on drama and action, Remender manages to sprinkle in at least one humourous moment with the Taskmaster, much to Baron Zemo’s frustration.  And just to add to the mix, Batroc the Leaper makes an appearance as does Baron Blood.  With Stuart Immonen’s stellar pencils accompanying Remender’s story, the book as well as the current storyline has been very exciting as of late.  This is definitely a great new era for Captain America. 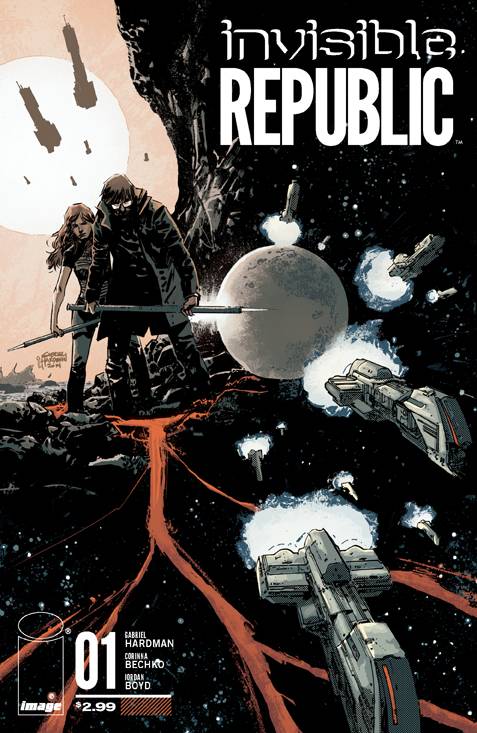 In the year 2843, the planet Avalon is in a sorry state as the fall of the Malory Regime has left it in a state of chaos and collapsing ruin.  For Croger Babb, he is looking for material for a story and he may have just found it by chance from a homeless person who was about to burn it.  That material turns out to be an account of the fallen dictator from a cousin that nobody had known about.  For Babb, this could be big.  Very big.  A brand new science-fiction masterpiece begins here by Gabriel Hardman and Corinna Beckho and even though it is just a single book, it is absolutely riveting.  You can see aspects of many science-fiction classics in this story, but it manages to be its own thing with some strong writing and some beautiful artwork to show for it.  What will be a lot of fun going forward in this book is to see how Hardman and Beckho manage to balance the current time featuring Babb on this disaster of a planet and the past as he reads the manuscript that he has found.  If it is just a straight up Neverending Story type of deal, it might get a little stale depending on how long this book runs, but if Babb sees some action, possibly from followers of the old Mallory regime, it will definitely make things pretty interesting.  Even more so, if Maia Reveron, who is the subject of the story was still alive, it will be even more intriguing, not to mention exciting.  So far the book is off to a great start, getting its hooks into you in the best ways possible.