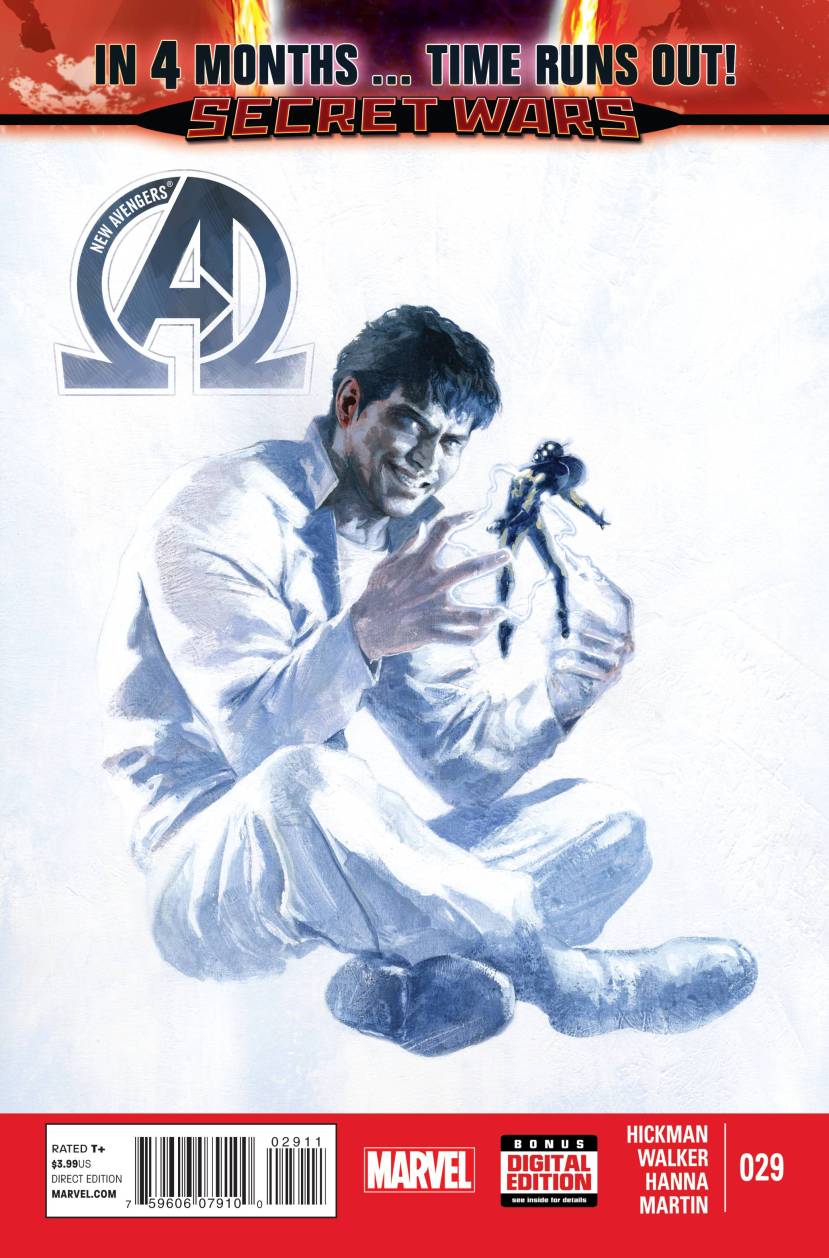 After the events of last issue, everyone is now playing nice with each other including the Illuminati, Captain America and S.H.I.E.L.D. and all the other various Avengers.  Things are not going well as Reed starts to explain just how bad things are going to get, and the fact that no matter what they had tried to do to save the Earth, whether through the use of a Cosmic Cube or some other type of gadgetry, all has failed.  Reed goes on to tell everyone assembled that there are only a couple of dozen Earths left in all of the multiverse and that come the end of the incursions, our Earth will be the last one standing until something happens to it too.  What that is, he does not know but he has one last iron in the fire and hopefully it pans out.  When picking up this book the cover had a very striking image, one that was slightly misleading, but also on point featuring the Beyonder.  Sadly, that Beyonder does not make an appearance in this book, but he/it does have something to do with the story and Reed’s last grasp for a means to save the planet.  What is a little interesting to note is how everyone is just sort of ignoring the fact that the Black Panther just recently murdered Namor and are letting him just do whatever he pleases.  It is understandable that it is all hands on deck at this point in time, but when Namor killed a planet to save the Earth – that was unforgivable, but when T’Challa murders a man that seems to be all right.  Desperate times perhaps.  The ending of the book was quite thrilling as you know that this is going to be one of those key moments before we head into Secret Wars and it really makes you want to read it now instead of having to wait.  Great stuff by Jonathan Hickman and Kev Walker, month in and month out, a truly riveting title.

Come the end of Kings Watch, a series that saw Flash Gordon, The Phantom and Mandrake the Magician team up to face Ming’s forces, it found The Phantom dead and no replacement at the ready.  For the first time in hundreds of years, there would be no Phantom.  Yet, Lothar takes on the quest of locating any living relatives to bear the costume and in the meantime, he wears it himself to keep up the legacy and to protect Bangalla from any evil that might arise.  There were rumblings that having Lothar take up the mantle of The Ghost Who Walks would be somewhat terrible and was actually quite frowned upon, but after reading the issue it is great to see all of those people proven wrong.  Lothar does not even want to wear the costume surprisingly, instead wanting to find the man who truly deserves to wear it.  He does understand though that if someone does not take that mantle up in the meantime, people with motivations that may not be as pure could take advantage of The Phantom’s absence and that would be bad for all.  Being the second title to be released this week as part of Dynamite’s new King line of books, the other being Flash Gordon, Brian Clevinger writes a very solid story and it is quite a lot of fun.  It also sets itself apart from the Phantom series that Peter David is writing for Hermes Press, where this one seems to be taking place in the now, that one has a very distinct, retro feel to it.  At four issues in length, it will be intriguing to see where this story goes, but with a great start to the book and some great artwork from Brent Schoonover, it is worth coming back for.