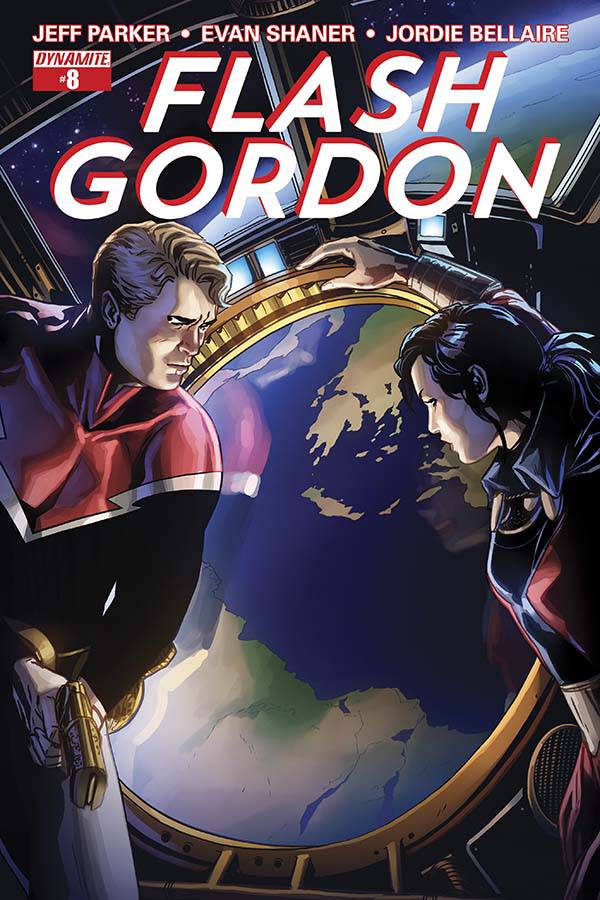 The biggest mistake Dynamite has made in the last couple of years arrives in the form of the last issue of the ongoing Flash Gordon series.  What Jeff Parker and Evan Shaner have done is take this eighty year old property and made it fresh, relevant and exciting for today’s audience.  It was a breath of fresh air not only in Dynamite’s stable of titles, but in all of comicdom.  This last issue finds our heroes back on Earth after the trials they have shared together, enjoying a little downtime for the most part, but for Flash, something is missing.  When he was in space and fighting back against Ming and his tyrannical rule it gave him the one thing he had been missing all his life – purpose.  So what else is there to do but head back out into the unknown with Dale and Zarkov by his side?  This book has been nothing short of pure, unadulterated fun since it began and it is a real shame that it had to end.  It is not often that an iconic character that has faded in glory over time can be brought back in such a way as to delight fans both new and old and yet Jeff Parker has done just that, crafting stories with a perfect balance between drama, humour and action as to be utterly compelling in every way.  Helping him along the way, and an integral part of the process has been Evan Shaner, a man whose retro-tinged pencils give the book a golden-age feel coupled with modern stylings and it has been one of the most consistently beautiful books being produced today.  Ending the book the way they did, with Flash and crew standing ready to take on Ming and the universe was perfect, leaving it wide open for whatever might come next, which we already know is the King Dynamite line of books.  This was a truly excellent series from Parker and Shaner, one that will surely be missed.

To say that the expectations for this series were high is putting it lightly, especially following in the footsteps of the previously concluded series.  What is really surprising is that instead of a reboot, hard or soft, the book pretty much picks right up after the conclusion of the last one with a tale that finds the crew doing what they do best – helping others.  Or at least they are going to try.  The writing by the new team of Ben Acker and Ben Blacker was solid and they did not miss a beat when it came to the characterization that Parker set up in his series.  There is a new little romantic plot twist happening between Dale and Flash which you sort of saw coming from a mile away that you never thought would come to fruition, and yet Acker and Blacker make it a reality and it is quite funny the way they go about it.  Zarkov is his usual self and remains the center of comedic relief even more so than Flash, as well as the father figure on the ship, albeit a very strange one.  Even the artwork by Lee Ferguson is a perfect fit for the book.  It might not have that same retro-look that Evan Shaner’s did, but it retains that really crisp, clean style that fits the characters so well and the book, for all intents and purposes, looks beautiful.  The book is packed with humour and quite a bit of action which keeps the pace up so that you never find yourself bored by what is going on.  With a little negativity present going into the book, it quickly disappeared as this creative team is doing the property as much justice as the previous team did and if a restart of the series was indeed needed, Acker, Blacker and Ferguson were the right people to go to.