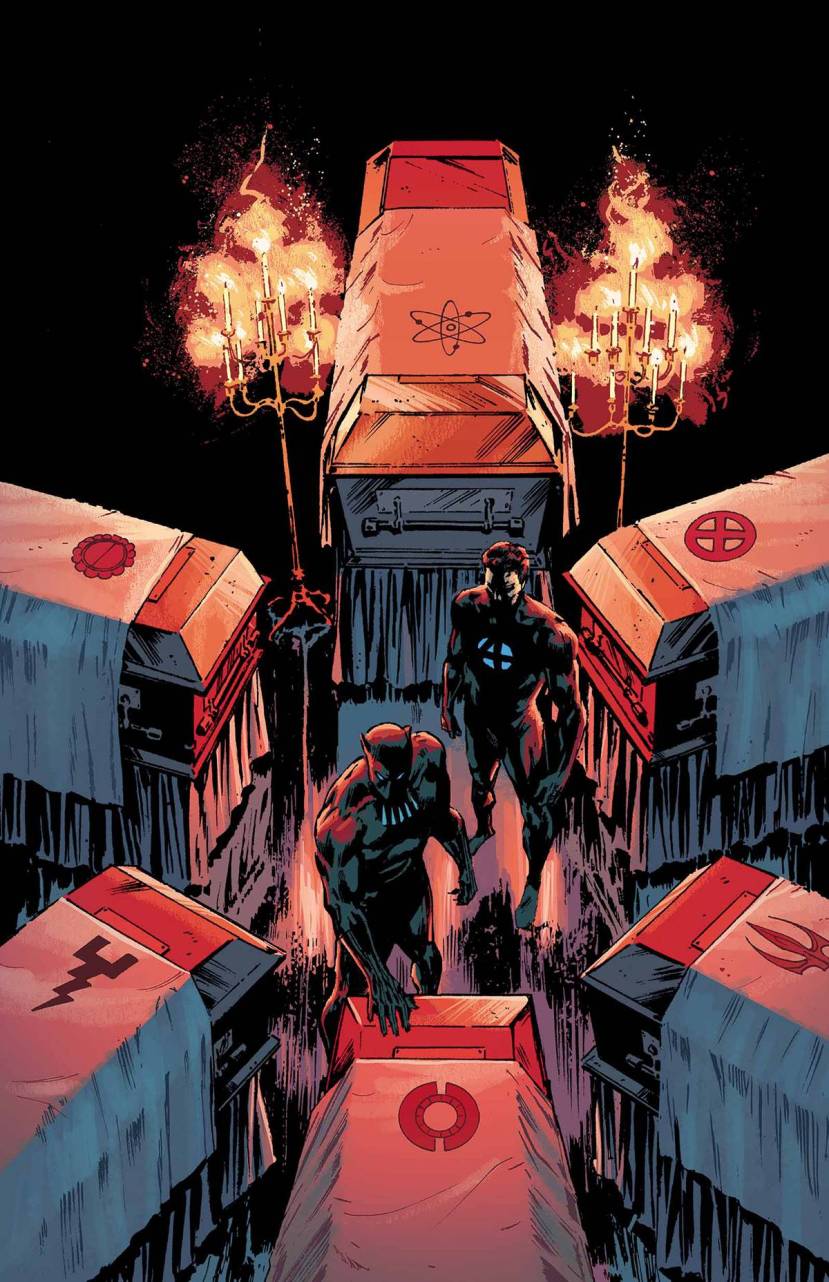 This book, which takes place during the events of issues twenty-three and twenty-four, comes from the point of view of Reed and the Illuminati which include Beast, Doc Green and Captain Britain.  They are there observing while Amadeus Cho is captured and interrogated, and while looking to find some sort of weapons they might use in Tony’s files, Black Panther reports in about the fall of Wakanda.  There is a lot of stuff going on in this issue, even though there is not a lot of stuff going on in this issue.  The book essentially sees what is left of the Illuminati, setting up base and talking about what has happened and what they have to do.  From that we are able to glean little bits of information about what went on during the missing time period that we are not privy to yet, and while it is quite fascinating in one respect, it is quite frustrating in another.  Perhaps one of the biggest tidbits that happened to be revealed was essentially a throwaway remark, one that suggested the demise of the Captain Britain Corps with Brian Braddock, coincidentally, being the only one left standing.  It also suggests that whatever went down in that period of time, to let S.H.I.E.L.D. rise to the amount of power they currently have, to facilitate the demise of Sue and Reed’s marriage, and to cause the downfall of both Wakanda and the Captain Britain Corps., has got to be something huge.  And where is Iron Man?  The book might be a little head-scratching at times, but it is incredibly intriguing and suspenseful and Hickman keeps you tuning in with every tiny little part of the mystery he unravels with every issue.

After reaching Skyworld, Flash and Zarkov have been captured by some siren-like ladies while Dale has been captured by the winged-men.  The winged inhabitants want the crystal that powers the Z-Plane, and to save herself, and her friends, Dale tells them a little lie which almost works out in the end.  Chalk another win up for the creative team on Flash Gordon for crafting another fun and thrilling ride with Flash and his friends.  Arboria was quite the interesting place, but Skyworld is a little more so with its biggest inherent danger being the landscape.  Flight is a necessity and without their plane, our heroes are woefully unequipped to navigate this world.  There is the usual quota of comedy that is pretty funny, most especially when Flash is being held prisoner and waiting for his ‘turn’ with his women captors.  What is really nice to see with this particular chapter is Dale taking the lead and the initiative, which is not something we have really seen too much of up until this point.  She is just as strong a character as Flash and Zarkov, and going forward, it would be nice to see more of this happen.  Evan Shaner’s pencils look as fantastic as usual, giving the book a modern, yet old-school feel.  Of course Parker, with his dead-on dialogue and quick pacing, leaves the issue on a cliff-hanger which will have you coming back for more.