In 1931 audiences would be treated to two of literature’s biggest monsters.  One would be the Frankenstein Monster by Mary Shelley and the other would be Bram Stoker’s Dracula.  While Frankenstein would make Boris Karloff a household name, Dracula would do the same for Bela Lugosi.  In that first iconic shot of Lugosi standing silently in his tomb as the camera zooms in towards him, you can see the quiet menace in his eyes and it drives home the feeling that you are in for a movie like none you have ever experienced before.  It sets the tone for the rest of the film to follow and that particular scene is absolutely frightening in its simplicity.  Directed by Tod Browning, also famous for directing the film Freaks, and the lost classic London After Midnight, he would unknowingly help to kick-start the age of Universal Studios’ foray into horror, one that would last almost thirty years.  It would also help to make Bela Lugosi quite famous; even now, decades later and forever associate the man with the role of the undead Count. 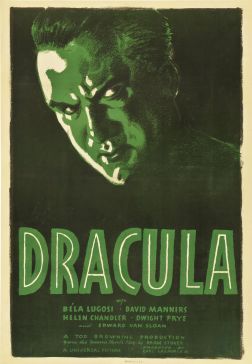 Lugosi of course, is brilliant in the role.  He plays the part straight-up, taking the job quite seriously, and it shows in the finished product.  His Count is always standing with perfect posture; he is always groomed with his hair combed back, and has the best of manners.  It adds to not only the mystery of the character, but also the eerie nature that he gives off throughout the film.  To also help with that, the movie uses shadows and darkness as a means to tell the story of the Dark Prince.  Lugosi is often in darkness, with only his eyes visible and they are like daggers, piercing as they glare at their target.  At times it is almost as if he is staring straight at the audience, looking through to your soul, so strong is his gaze.  Also aiding with his portrayal of the character is his natural Hungarian accent.  It gives more credence to the performance as well as an air of mystery as Dracula sounds like the foreigner he is when in England, lending more to the character than it would have if he were American or British.

Contributing to the air of suspense and horror throughout the picture aside from Lugosi himself and the heavy use of shadows, was the lack of a score and the usage of long periods of silence.  Tod Browning, being primarily a director of silent movies was more comfortable doing films without sound than the modern type of pictures that featured talking or music.  As it is, the lack of sound works wonders, creating terror through the use of it.  Sound is present everywhere, no matter where you go or what you do. Whether it is in mankind or in nature, there is always the sound of something making itself known and the absence of it is unnatural, much like the vampire of the picture.  The ramifications of said film technique raises the tension and the apprehension one feels as Browning makes you think something could happen at any moment and it is used to great effect throughout the film.

The special effects are otherwise limited, as Universal was not going to throw an endless amount of money at the film.  As such, we do not get to see Dracula turn into a bat or a wolf or anything else.  Most everything was done off-screen, but such as it was, it made you use your imagination which often thinks of things far worse than any visual could ever do.  To help Browning direct the film was cinematographer Karl Freund who was a definite boon to the picture.  Some scenes are utterly spooky such as the first time Dracula rises from his coffin or when his brides appear for the first time.  It is a perfect example of how lighting and costume design can also make or break a scene as the brides seem unearthly in their white garb, nearly ghost-like as they slowly pace across the ground. 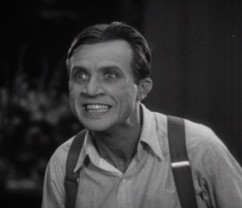 The rest of the cast does a great job of it as well with Helen Chandler as Mina who is perfectly cast as the object of Dracula’s affection, being young, pretty, a little waif-like and seeming quite innocent throughout the film.  David Manners stars as John Harker, Edward Van Sloan as Van Helsing and Dwight Frye as the insane and manic, Renfield.  Van Sloan is particularly fun as the man who wants to put an end to the Count.  He almost seems to be gleeful in the role as if he was actually about to go hunting the real Dracula.  Herbert Bunston would also appear as Dr. Seward and Frances Dade would star as Mina’s friend Lucy.  But the man who would draw the most attention other than Lugosi would be Dwight Frye.  Frye’s disheveled and erratic character was the polar opposite of Lugosi’s proper gentleman and his portrayal of Renfield would end up being on the most chilling performances in the movie, as if he was actually a madman in truth.

Much like most Universal horror films that were to follow, Dracula dealt with the age old themes of life and death and good versus evil.  Dracula of course, personified both evil and death.  He is a creature capable of great deception, but one not totally without feeling.  He might always be in pursuit of his next meal, but he also seeks to find someone to spend eternity with which suggests that their is something within him that remembers his humanity.  It also helps to illustrate his nature as his weaknesses are those that usually exemplify good, such as sunlight and the cross.  After Dracula, Bela Lugosi would go on to other films and other roles, but none so famous as his first breakout movie.  He would play the Count one more time in the Abbot & Costello Meet Frankenstein film, but in the intervening years, he would shy away from repeating the role in the sequels as he was scared of being typecast.  As it is, that did indeed happen and when one thinks of the man, Dracula is what comes to mind.  Dracula from 1931 stands out as one of the best examples of early horror cinema and will always be remembered, not only for Bela Lugosi, but for bringing Bram Stoker`s masterpiece to the big screen.