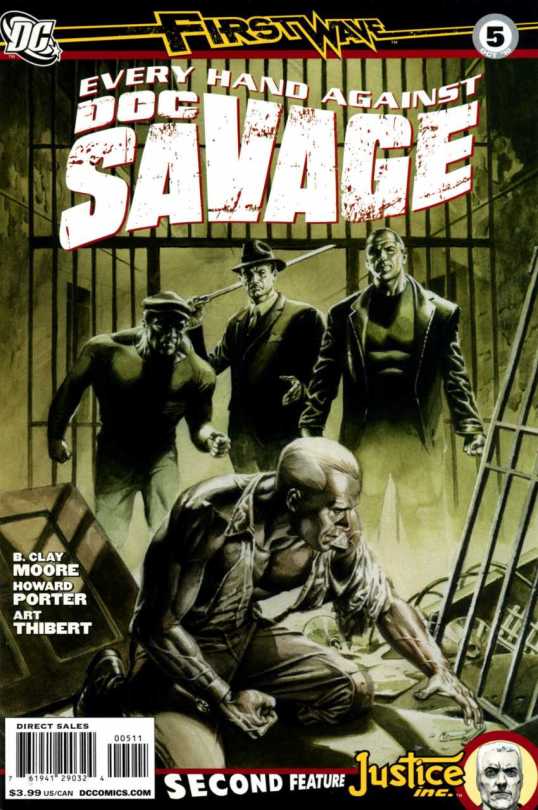 B. Clay Moore comes on board as the new writer, at least for this issue and takes our team to Greece.  They are looking to set up a new headquarters as the previous one was just demolished and the citizens are none too trusting of them at the moment.  They meet up with Nikos, a gangster with whom Doc is friends with and one who might be able to help them get back up on their feet.  He sets them up with a ship which unknowingly is being inhabited by a man named Solakis and his casino.  Things do not go so well and a fight ensues between the two groups of men with Savage and his team coming out on top.  This issue was a slight improvement over the last four, but not much.  It still assumes you know what is going on and who most of the characters are without being introduced to them.  The action was fast and furious and helped move the book along to its eventual conclusion.  The second feature is the fifth part of Worst Nightmare, the tale featuring Justice Inc. and the Avenger.  The kidnappers are greedy and because of that are getting careless.  Richard Benson, the Avenger, finally tracks them down and is able to get his men out in the end.  Jason Starr and Scott Hampton deliver a fantastic, pulse-pounding and suspenseful conclusion to their story.  Hopefully the backup tales continue as they are the best thing about the book when sadly, it should be the lead feature.  Big thanks to Jason Starr for giving the reader something to look forward to in these books.