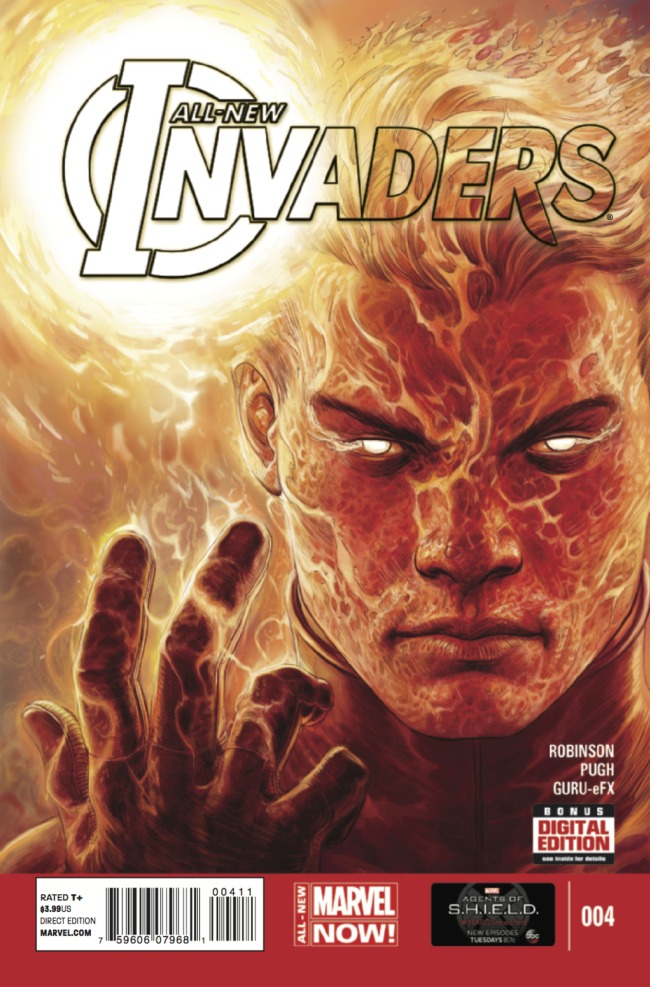 Frankly, the story up to this point has been pretty drab, not in the sense that it was terribly written or anything of the sort, simply the fact that it was a little boring.  This issue finally finds Robinson picking up the pace and crafting a fairly entertaining and engaging story.  The issue finds our heroes on Hala, the Kree homeworld and about to face off with Ikaris before he either kills them or they are put to death should they defeat him.  But having faced the Kree multiple times, not to mention teaming up with them during the intergalactic war in Infinity, Cap knows a thing or two about them and has a plan in place.  Steve Pugh seems to be getting better issue after issue drawing our heroes, not to mention every other part of the page.  The spread featuring Namor coming out of the sea with a number of gigantic creatures is simply beautiful and one of the best pieces of art in any current Marvel comic.  Points to Robinson for bringing in the Eternals, at least Ikaris for the moment, as appearances from the group are too few.  There are a couple bits of dialogue that seem out of place or do not ring true such as the Torch calling the Supreme Intelligence, ‘big green head.’  Other than that this issue has been the strongest of the run so far.  The book leaves us on a cliff-hanger, and with the quality improving, means definitely tuning in next month for more.

Fallen finds our hero, Aquaman in battle against Hercules after having been released from an Atlantean hell made to hold the Gigantomachy.  Meanwhile, Mera has been attacked by Atlanteans, but saved by Tula before possibly being killed.  With the last issue, and continuing here, the book has finally found its purchase with Parker at the helm.  Great to see some more Greek mythology entering the DCU and that it will lead to a team up with Wonder Woman in the near future.  Also interesting to see how Atlantean history mingled with that of the Greeks, insofar as much as we have been shown.  The artwork was a little inconsistent when it switched between Pelletier and Martinez.  Not completely jarring, but noticeable and a little uneven to pause for a second when reading.  Parker sets up a little intrigue in the book back in Atlantis and should make for a fascinating homecoming for the king.