Toy-box – I Ain’t Afraid of No Ghost!

Well you should be! Look at this terrifying creature and despair! Who am I kidding, this thing’s adorable.

Today we’ll take a look at one of Funko’s blind box vinyl figures for Game of Thrones Series 1, available in stores right now. Spoiler, I got Ghost.

One either loves or hates blind boxes. If the series is strong (good character selection/big enough roster) from a franchise I like and is a decent price point, I love ‘em. It’s a thrill cracking open that tiny case to reveal the treat inside. It’s almost like a Kinder egg… without the chocolate… so nothing like a Kinder egg actually. 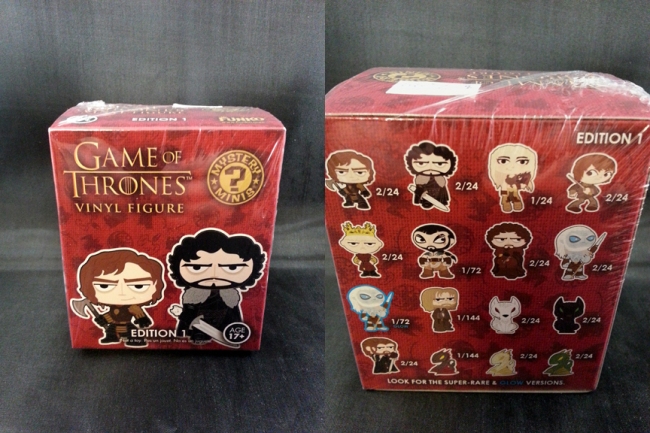 The fig comes in nice sturdy little box that is rather big when compared to other blind boxes. The front and the sides show off a selection of the character roster and the back displays the entire line-up with each figures rarity. I dig how each figure is shown off with artwork rather than a photo. The character line up is really great; there are no losers in the group. There are even rare glow-in-the-dark versions of some characters. The standout for me is Jamie. They could have gone with a “hero” version of him in armour and full of swagger but they went with one of him in dire straits. Gutsy choice and I LOVE it. Too bad I’ll probably have to resort to the aftermarket to get him.

Behold! Ghost. I was super-hyped when I cracked this open and this bundle of joy dropped out. The designs of these vinyl figures are defiantly cartoony. These are not realistic sculpts that can go along with the Legacy series from Funko. There’s not a lot of sculpted detail but the basic form is solid. It’s a dire wolf and you can tell that, so what else would you want from this style of figure? Ghost does feature one point of articulation, his head rotates.

Ghost has a few nice little paint apps added. Some little fur tuffs have been applied across the figure to give it sense of depth rather than leaving it as a plain white mass. Of course, Ghost features his trademark red eyes, a detail unique to Ghost and not shared with any of his brothers or sisters. All the lines are solid and the contrast in black, white and red give Ghost an intimidating appearance.

I am very happy with my first Game of Thrones blind Box figure from Funko. Ghost was a great first get and I’m sure there will be more to come (there have been). Series one has a great line-up of characters and a decent price point (about $8). These little guys and girls are definitely worth picking up and adding to either your vinyl or Game of Thrones collections. As a note, the human characters in the series are actually larger than the creature figs and are scaled to each as well, great job Funko. Also, if you are wondering, the creature figs do look great with the Funko Pop! Game of Thrones figures. Check out baby Ghost chilling with Ned (I haven’t got John yet). 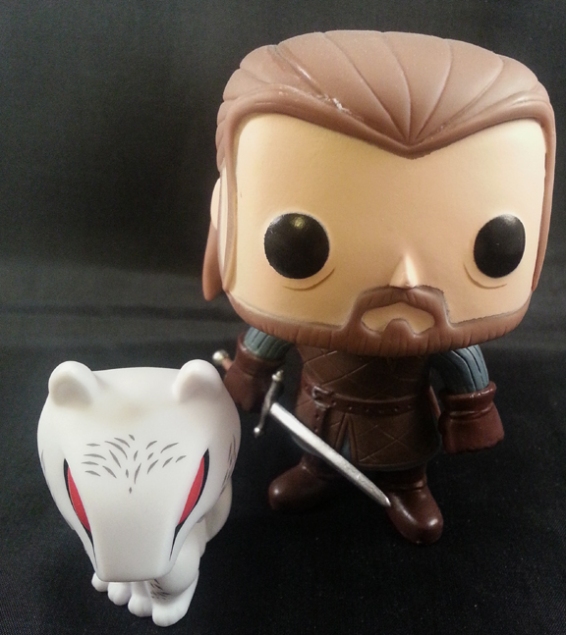 A long time comic and toy collector, Wagnarok’s wisdom is too great to be contained. Thus, this review.