A Whole Lotta Fun! – Tech Jacket: The Boy From Earth 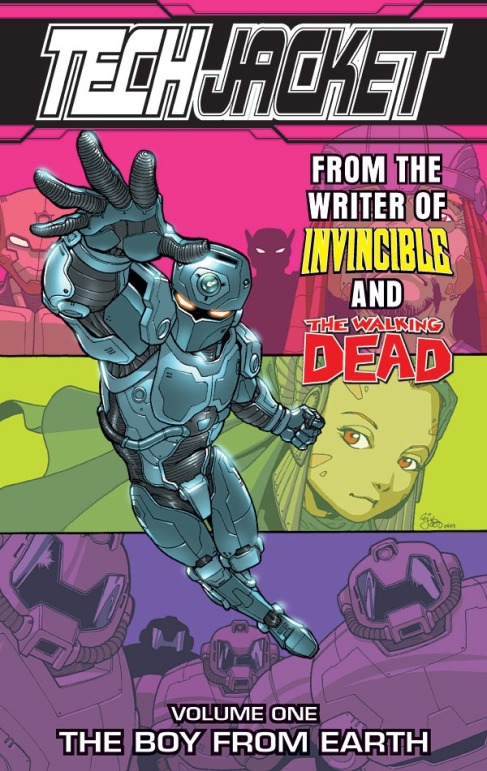 It seems of late that nobody does coming of age superheroes better than Robert Kirkman.  His book Invincible proved that quite flawlessly and continues to be one of the better titles in the Image stable.  But before he ever came to write that, he wrote a little six issue miniseries called Tech Jacket about a boy who ends up inheriting a powerful weapon in the form of metal armour.

How did he get it though?  Why, from an alien who crash-landed on Earth, much like Abin Sur in Green Lantern, and instead of letting the boy die in the explosion that was soon to follow, he passed his armour on to save the innocent life of the boy.  And so began Zack’s trials and travails as he learns to use the armour and its many capabilities both on Earth and the alien’s home planet of Geldaria.

A pretty simple premise for a book, but one that works and will work each and every time as long as it is written well.  And Kirkman, having grown up on comic books, knows what works and what does not and he does indeed write pretty good stories as proven by the Astounding Wolf-Man, Super Dinosaur and the Walking Dead.

What makes the book work on every level though is the fact that it is the polar opposite of ‘grim and gritty.’  The book is a lot of fun and extremely lighthearted, taking very little seriously except Zach’s love for his friends and family and by doing so, just happens to be one of the best all-ages books to come out in the last decade or so.

Zach is a great character.  He is just a boy who wants to do the right thing and along the way, if he can help his parents out, get a girlfriend if possible – human or alien will do, and perhaps be a superhero while doing it, then all the better.

To add pictures to all of those wonderful words is E.J. Su.  His art comes across as something of a mix between your average North American styles with a little anime influence and it really sets this book apart.  It is refreshing, buoyant and makes you smile as it is almost like watching a cartoon at times, and is a wonderful break from the norm that most readers are used to in most other titles.

It is sad that this book never evolved into an ongoing title though, but good in a way as it paved the road for Invincible to possibly become the book Tech Jacket could have been.  With all of Kirkman’s success of late, the door remains open for more of Zack and his adventures to make their way to us.  At least we can only hope so.