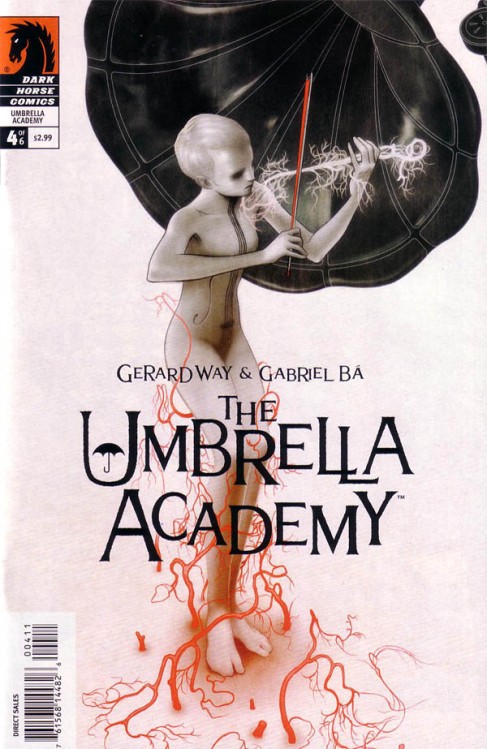 Truth be told, there was some trepidation going into The Umbrella Academy.  It was after all, written by a rock star that was, outside of music, unproven.  Gerard Way, former lead singer of My Chemical Romance knows how to write a song.  In fact, he has written quite a few, and though music is appreciated differently by all, they are quite good.  Case in point, The Black Parade album is a masterpiece being a modern rock-opera reminiscent of Queen or Meat Loaf.  But could he write a comic book?  Could he squirrel his way into the heart of fandom and come up with something that would be appreciated by the masses?  That was the question.  The answer, after reading through it in a half an hour, was yes.  Gerard Way could write a comic, and in fact, he could write one very well.  That trepidation it seems was unfounded.

What Way did with this book was something really smart as he took a part of his world, that of music, and incorporated it into the most popular form of the North American comic genre – the superhero.  The result was the Umbrella Academy, a team of heroes brought together as very young children and raised as a family by The Monocle.  A family, at least, as far as one could be called in such circumstances.  In doing this, what we received was a world and a family with complicated and intertwining relationships that we are given glimpses of against the backdrop of a larger threat.  That threat, which is ever-present in almost any story and which also just so happens to be one of the most intriguing aspects of the book, is one of the Umbrella Academy’s own.  Though the plot may not be the most original aspect of the book being featured numerous times in numerous titles, there is a lot to love about this tome.

For one, the relationships between the members of the Academy are as complicated as any family real or dreamt of.  The Monocle, the de facto leader and the man who brought them together is the father figure to the seven children.  While he pretends not to care, trying to place himself above all else for the good of the team, deep down he does indeed care more than they would ever know.  To do this he forgoes naming them and assigns them numbers instead until when they are old enough, they choose names for themselves, Number 1 choosing Spaceboy and so on.  Another aspect that is touched upon but not explored too in-depth is the fraternal and sororal bond between them all.  While they grew up together as strong as any real family, they are not related in the technical sense and some of them develop feelings for each other which only complicates things as they grow older, up to and including the events taking place during the present story.

The narrative, while quite fantastic with its tale of family and betrayal is only one facet of the book.  There is much to appreciate aside from that including some of the little things, such as the intros and titles to each chapter which tell us who will be starring as well as what story we are reading, and almost seems like a tease foretelling that there are others.  Each chapter also has interesting little outros which run the gamut from a blurb to a riddle to a set of stats.  Small extras like these really enhance the book from a visual standpoint and it makes for a more enriching experience.  And while not mentioned as often as the writer or penciller, the letterer of this book, Nate Piekos, did a great job from the dialogue to the title cards, and really made the story flow nicely.

Speaking of visuals, the book could not have been a success without the help of James Jean on covers or Gabriel Ba on interiors.  Ba does a fantastic job on the character designs, some of them very unique.  The White Violin as an example, has a very minimalistic look as she is simply all white with the features of a violin imprinted on her whereas Spaceboy is much more complicated as he has parts of an astronaut’s costume, the head of a man and the body of an ape.  These and more show the inventiveness of the collaboration between Way and Ba with every page featuring something just as striking.  While Ba is his own man, his pencils seem to have leanings towards Ryan Sook with a little Mignola thrown in for good measure.  The panels he puts down are exciting and vibrant and there is always something going on and something to look at in each one.  Whether just a villain standing around, Number 5 scheming or a member of the team in action, the artwork moves you through the story, at times just wanting to marvel at everything, but also to tear through it as fast as you can as it is so captivating.

The Umbrella Academy may seem like a normal tale of heroes and villains, but underneath it all, Gerard Way also makes it a tale of family and the trials and tribulations that go hand in hand with it.  It is an almost matchless book amongst the glut of superhero tales that permeate the stands today as almost everyone can identify with the subject found within.  And should they not, when it comes down to it, it tells that superhero story better than most.  So for those that might have dreaded trying out The Umbrella Academy, or for those with a little trepidation, it is really quite unnecessary.  This book is good.  Really good.