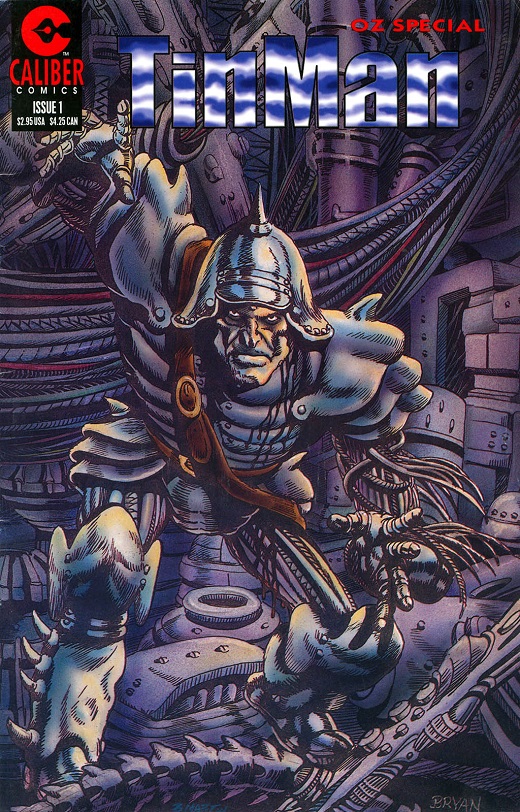 Tin Man, the fourth special released in conjunction with the ongoing Oz series is one of violence and mayhem. Tik Tok is on the run and there is a very good chance that he is not going to live through the experience. Try as he might, he cannot shake the Tin Man or the mechanical monstrosities that serve him. Thankfully, Amber Ombi and his companions which includes Wogglebug and Hungry Tiger show up to save the day, or at least they try to. Much like the previous couple of books, this one follows a similar formula as it features one of the future Freedom Fighters facing danger from what used to be not only a friend but one of the heroes of Oz. In this particular instance, it is Nick Chopper – the Tin Man and he is not happy with Tik Tok nor with humanity in general. He means to make an example out of Tik Tok and those who have decided to side with him but if Amber Ombi has anything to say about the situation, nobody is getting killed here and now. Be that as it may, the Tin Man is far too much for them to handle and the only thing they are able to do is to create enough of a distraction so that they might escape. The Tin Man, of course, is furious. While this issue was a fun read and featured a lot of action within its pages, it offered very little that was new to the reader which was a bit of a shame. It was not bad per se, quite the opposite in fact, it was simply the repetition of the same story elements that knocks it down a couple of notches. Readers have already seen an evil Scarecrow and an evil Lion attack those they once called friends and they have seen Amber Ombi intercede as well as witness them escape from the overwhelming forces against them. There was a chance to do something a little different but that choice was obviously never made and so, though it might have been enjoyable, lost a bit of the magic. As for the Nome King and Mombi, they are still plotting and very little headway was made on that front either. Altogether, while this was a decent outing, it could have been more than it was. It is hopeful that the last special, called Freedom Fighters, goes in a bit of a different direction and lays the final groundwork for what is currently happening in the main title.