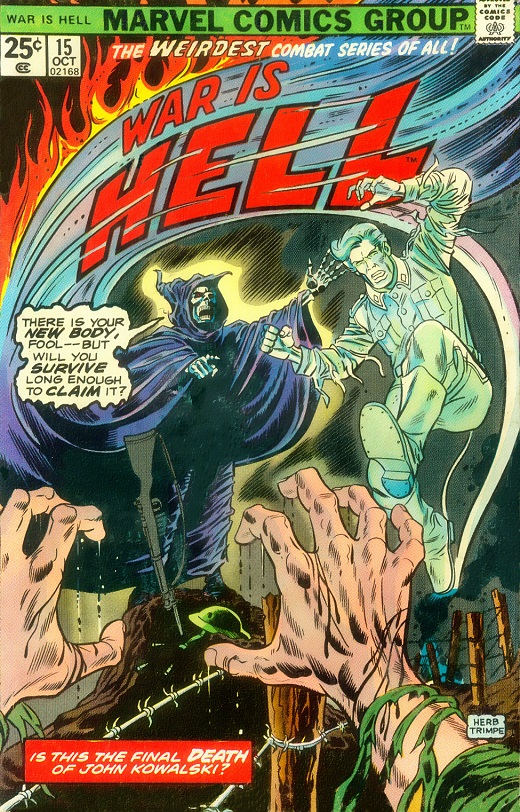 The final issue of War is Hell starts out with a bang, literally as Italian soldier Sgt. Lucien Dax gets a bullet through the chest. That being said, it does not mean that everything ends right there as Death is on the scene and believes that this is the perfect opportunity to bring John Kowalski back from the dead one more time, giving Dax and Kowalski another shot at life, after a fashion. This leads to an incredible act of heroism on Dax’s part against the British forces whom they were standing against. As it is, his men are astounded at Dax’s actions and while they bask in their win, they know that they have a long way to go before they are in the clear and the first step is to take out the British garrison so that they are unable to gain a foothold in the area. Suffice it to say, things do not go according to plan, though they do go well – at first. It seems the British are already here in force and there are far more of them than there are of the few Italian soldiers who accompany Dax. Chris Claremont writes a great tale, one that features the little guy against a more prominent opponent, a classic trope but one that always tends to work when told well. This story was just that and when one factors in the ever-present spectre of Death and the fact that Kowalski continues to die over and over only to return to the hell that is life, to the heaven that is life, one cannot help but be hooked to every page to see just how it will all turn out. Taking this final ride with Claremont is Herb Trimpe whose work is top-notch, the man being the perfect artist to take this last story to the next level with his incredible depictions of heroism and horror. As the book moves on, Dax and his men make a push and head to the Mediterranean, a trip against all odds and somehow they end up making it. As luck would have it, they also get a ship by overpowering the British who command it. When they finally head and reach home, they find that their worst fears have come true and Dax/Kowalski makes one last sacrifice before dying once more. Altogether, a great issue and an overall great series despite half of its issues being reprints. There was a lot of action and a good dose of horror in its various forms that would keep readers reading and it is sad that it could not continue any further than this. Definitely worth seeking out.