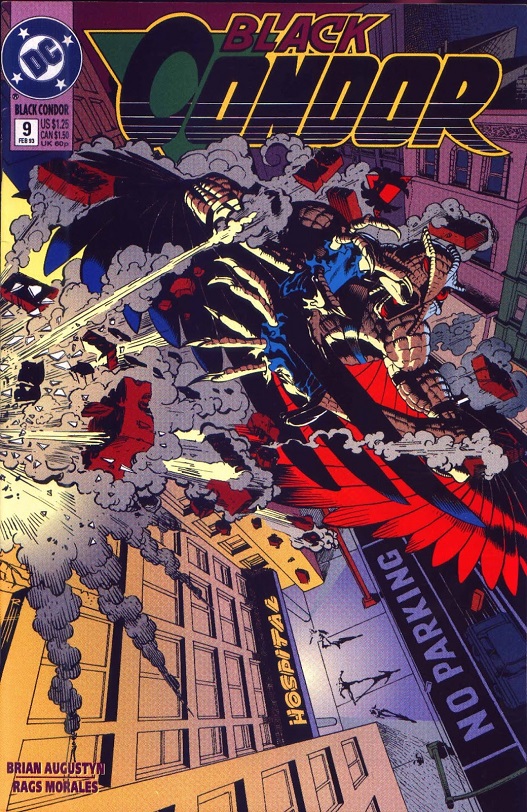 After saving Bonnie and Ned from a bomb that was set to obliterate them, Black Condor finds himself injured grievously and needing a bit of medical attention. As he is being looked at, a strange transformation begins and it turns the man Ned once knew into a monster. Black Condor or the creature that he is now, breaks out of the hospital and goes on the run which leads Ned and the police to chase him all over the city in order to help him. Elsewhere, the monster that Black Condor fought in the Pine Barrens previously makes his return, looking to put the hurt on the chemical company that created it. Chaos ensues as the monster goes on a rampage and while Ned thinks it might be Condor, he realizes his mistake until eventually, the real one does show up. Brian Augustyn and Rags Morales continue to tie in events from past issues to make this series feel like every chapter matters and that nothing is forgotten, at least for the most part. As the two creatures are on the loose, for it is hard to say if Black Condor has any intelligence in the particular form, the creators of this story introduce The Ray to the pages as there should be some sort of hero to stop them from doing whatever it is they have planned. Even more interesting about all of this is that The Ray is haunted by his dad, the first Ray to hold the title much like the original Black Condor had made an appearance earlier in the series. Where he has been has still not been addressed but hopefully, it will soon, especially as it seems too coincidental that two members of the Freedom Fighters are haunting their modern-day equivalents. As it is, it makes for a very interesting scene and soon The Ray is off to confront the monsters and instead of taking on the bad guy, he accidentally assaults Black Condor much to the shock of Ned who has been watching the entire thing. This was a pretty good issue overall though Augustyn continues to create new mysteries in the title while solving very few. Lots of action and a bit of drama make this book move along at a great pace and with some effective artwork from Morales it makes for a good issue.