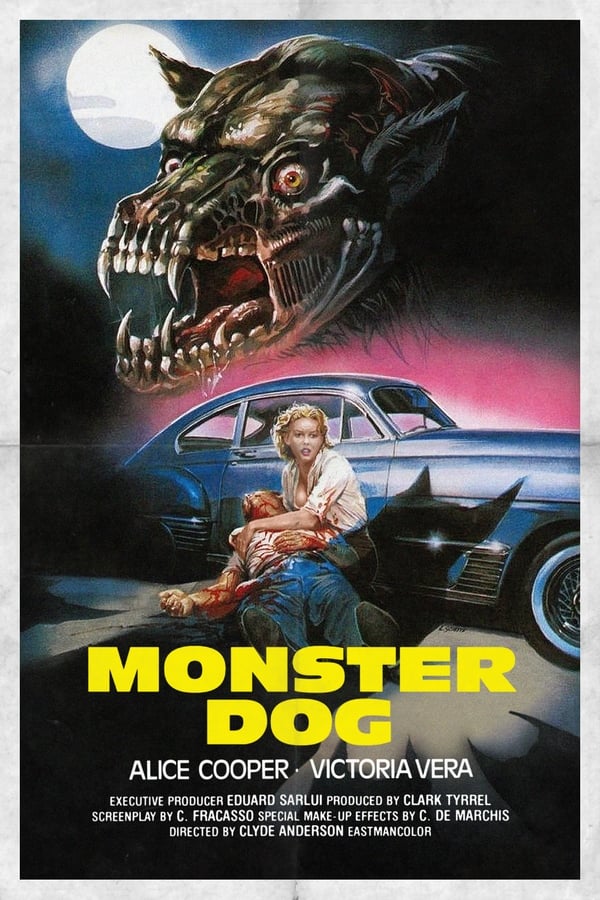 Once upon a time, Alice Cooper decided that he wanted to be in a movie and Monster Dog just so happened to be the one he settled upon. Such as it is, it

turned out to be fairly decent with Cooper and the dogs being the best parts of it.

Cooper stars as a rock star looking to shoot a new music video and he decides to do so at his old childhood home in the country. As the house is prepared, the caretaker is killed by a pack of wild dogs. Along the way, the crew meets a couple of cops who are soon killed by the titular monster dog while hitting one of the wild dogs themselves a bit later. They are offered a wanring by an old man who wanders in from the woods, telling them they will all die, all that is except for Vince, the character played by Cooper. Things go from strange to worse as things at the house do not go exactly as planned. Nightmares are had, old memories dredged up, dogs are everywhere and the locals are riled up with Vince being back, believing that he is the Monster Dog and that they should have killed him years ago. Come the end of the movie, there are bodies everywhere with only final girl Sandra as played by Victoria Vera left standing.

When a person thinks of werewolf movies, this is not one of them. Even for those that have watched all the schlock in the world, this is still not one that would make it to the top of the list though it is possible it might land somewhere in the middle. That being said, it is strangely a lot of fun once it finally gets going about a third of the way in, though it is somewhat weird and definitely not the average werewolf film even though some of the same hallmarks

are present. There is the spooky manor home, the gothic-type atmosphere, the local stories of the family cursed by lycanthropy and not to mention all the bodies that begin to fall soon after the wayward son decides to come home. Cooper is that son of course and the man does quite a decent job of it, especially once he is in full Terminator mode. He does sing a couple of songs of course, and they are far from his best, and while some might have tuned in to see if he would drop some new tracks, it is not for that which makes the movie memorable.

There is some good horror present during the final act of the film when everything comes together and the violence really begins. The dogs are out in full force and attacking everyone in their way, the yokels are all worked up over Cooper coming home thinking him the monster they failed to slay years ago while Cooper himself is hellbent on finding the one responsible himself, to clear his family’s name and free himself of his past. Directed by Claudio Fragasso, the man does a fair job of it and casting Cooper was a bit of genius on his part, while also trying to do something a little different with the genre. There were some negatives present like dialogue and the prowess of a few of the actors but overall, Monster Dog is a film that will entertain more than anything which is what all good movies should do.