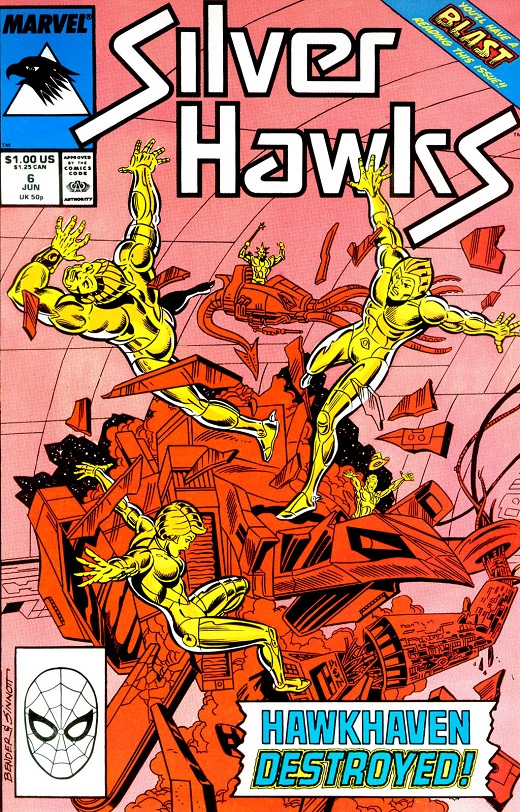 When Mon*Star’s cronies attack an armoured ship full of money, the Silverhawks step in to put a stop to them but not before Stargazer is meant to look like a fool and when all is said and done, feel like one too. Maybe his time is over he ponders, especially with the Silverhawks and all their new bionics and such, perhaps he is just an old outmoded lawman. The Copper Kid feels bad for him and yet can do nothing about it and so it is that Stargazer heads to Earth. Perhaps he will get some upgrades and make his way back to Hawkhaven or perhaps he’ll just ride out the rest of his days on Earth while the younger generation holds the fort in Limbo. This is exactly what Mon*Star was waiting for and soon enough he and all of his men launch an all-out assault on Hawkhaven while seemingly killing Bluegrass along the way. Steve Perry and Howard Bender present the best issue of Silverhawks yet, one that goes to prove that maybe Commander Stargazer is a character worth keeping around while also showing Mon*Star in the thick of it, finally launching an attack on the Silverhawks that he should have done long ago. While the battle is short and over quicker than it began, it still goes to prove the villain has brains and quite a lot of brawn on his side should he really decide to flex. That being said, it should have taken more than a single punch to take him out, even in his powered-down form but be that as it may, it was good to see the people who are not usually in action – in action. As the book ends, it finds all of the villains off to prison once again leaving Limbo in relatively safe hands though if they are all in prison, who will the Silverhawks battle with? There is the promise of a new Silverhawk in the next book so one has to wonder if he will be a friend or foe and if the latter, can he still be called a Silverhawk? With some good artwork from Bender who replaces Mike Witherby, the book ended up being a lot of fun.