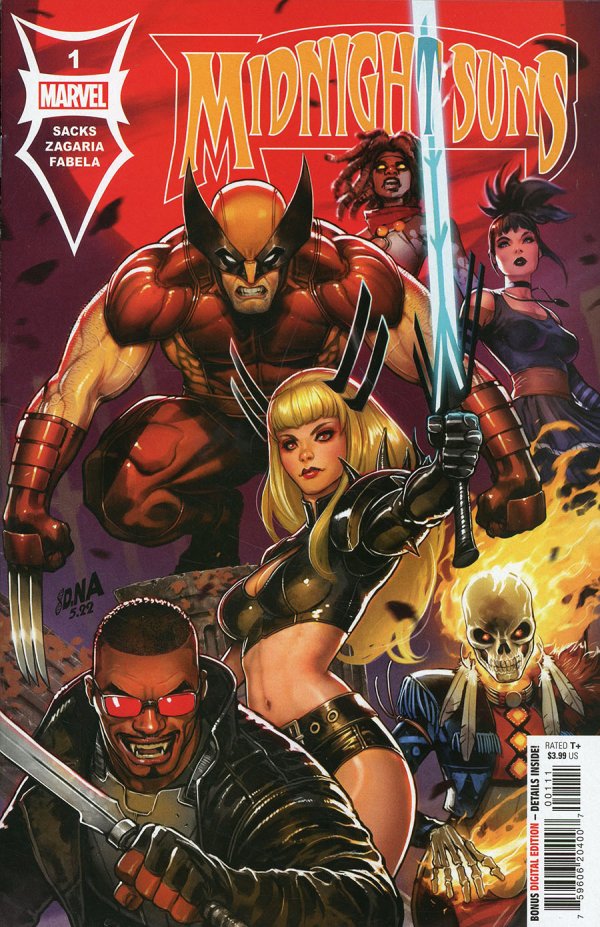 The Story – The apocalypse is coming in a few days and only a handful of heroes can stop it.

The Take – Ethan Sacks and Wuigi Zagaria give readers everywhere a new iteration of Marvel’s Midnight Sons, now Suns and the team, for what it is, is quite interesting as far as membership goes. All of them come together due to a vision that involves one Zoe Laveau, a student of Strange Academy that says she will be responsible for the end of the world. It is a good thing then that Blade is on campus, not to mention teachers Magik, Nico and Agatha Harkness. Said vision was a powerful one though, going out all over the world it seems as Spirit Rider, Clea, Dr. Doom and more were privy to it. While Zoe might be the person bringing about the end, she is not alone as some shadow creatures attack the school looking for her, coming to claim her in order that she gets about her business to hasten that conclusion which was recently foretold. Sacks does a good job of introducing the reader to each of the characters though it feels strange to shoehorn Wolverine into all of this, it obviously being a marketing gimmick to get the book moving off the stands. As for the big bad, there does not necessarily seem to be one as of yet, aside from that last page though Doom could end up being a friend rather than an enemy. What there is though is a situation that pulls everyone together and it looks as though it could tie in to that which happened on the first couple of pages of the book which is sure to get a little more explanation as things move forward. The big question on everyone’s minds though is if this book will somehow reference or factor in any members from the original Sons, other than Blade that is or if it is simply a play on the name, yet another marketing gimmick to get readers interested in the book. Whatever the plan is, Sacks makes it all interesting enough and Zagaria does a great job at making it look good so as to make readers come back for more in the following issue.