Issue by Issue – Doorwary to Nightmare #3 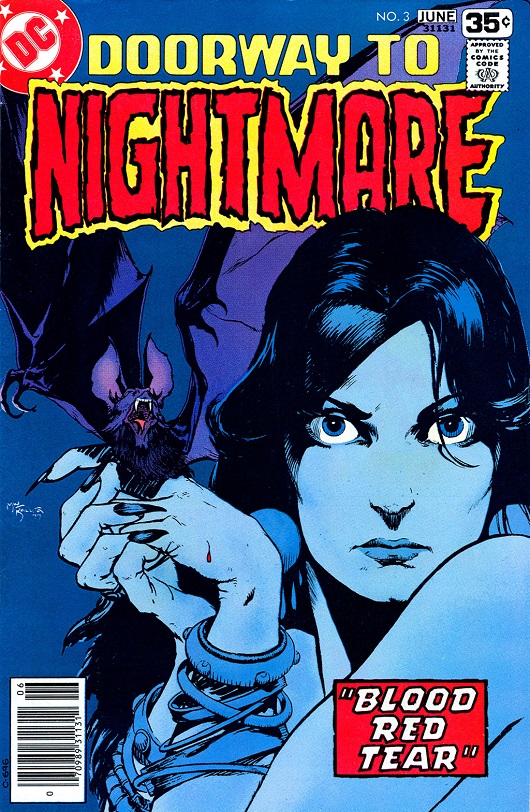 Roger McKenzie, with a plot by Bill Kunkle, and Ric Estrada chronicle the latest tale to feature that mysterious fortune teller named Madame Xanadu and they do so with a story about love and loss. It begins like all the others, with some helpless soul who just so happens to wander into Madame Xandu’s shop and much like those others, she happens to know more than she lets on. The young woman as it is is looking for a little help with the man she loves and she goes on to describe him, how he is so strange, unlike anybody she has ever met. She tells of her new job, of what it is like to work for him and of the strange things that began to happen a few weeks into it and Madame Xanadu knows exactly what the young woman is talking about. So it is that the young lady leaves with some advice and one evening brings up the idea of the man she loves going to see the fortune teller. He is furious but agrees to do so which leads to a very interesting moment in the book as both he and Madame Xanadu have a shared past, far in the past and this both gives readers a small glimpse of just who the woman is as well as creating a compelling bit of drama. While readers might have already guessed as to who and what the man in question is, it soon comes out when he brings the woman he has been courting to a party, though it is a party that none have ever seen the like of before and it is there that she learns he is a vampire. To most, it would be quite shocking and to her it is, but she soon comes to her senses and with another trip to Madame Xanadu’s, she realizes that vampire or not, she wants to spend the rest of her life with him – her eternal life. There is nothing quite like a good bit of gothic horror and this book definitely delivers it and even better, serves it up with a slice of tragedy to close it all out as the vampire learns that what he once thought was dead, remains alive as he loves her and lovers her too much to let her be as he is. In all of this Madame Xanadu remains the curiosity for she says nothing and does nothing but console the young woman when it is all said and done and as it leaves off, it makes readers wonder even more about the fortune teller and just what her past is, what secrets she might have. A good issue in a book that remains as strong as it was from the first issue despite the rotating creative teams.