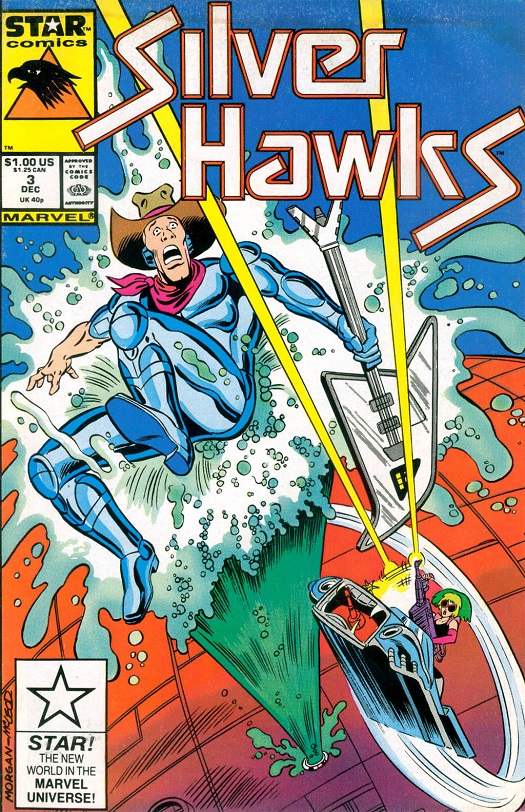 Being a part of Marvel’s Star imprint, this particular issue of Silverhawks is definitely one for the kids as it is part D-movie Western and part juvenile comedy and it reads just like that. Suffice it to say, this one is not necessarily for those who feel young at heart of all ages, but it is not all that bad either. It all begins with Bluegrass who is sent on a mission to check out a story of some stolen gold and while doing so, he runs into a little more trouble than he anticipated. Bluegrass does find the old man whom the gold was stolen from and he discovers the culprit who did the stealing but where that complication comes in is Melodia who has come to steal the gold from the thief for Mon*Star who wants it for himself. This leads to a bit of a fight where she comes out on top and Bluegrass calls for help which means the rest of the Silverhawks. Once the team arrives, the bad guys, Melodia included, do not stand a chance. Steve Perry who continues to chronicle the book, adapted this story from the teleplay and the man does a decent job of it, creating a fun tale that is fairly enjoyable, especially for those that might have liked the television series it is based upon. Continuing to bring it all to life is Mike Witherby and the man captures the likenesses of both hero and villain alike perfectly and makes it as exciting as he possibly can. If there was one thing that this story could have used less of, it was Bluegrass who is arguably the weakest of the Silverhawks and the one that is also least interesting. In theory, a space cowboy should be a lot of fun but Bluegrass seems to be every bad cliche from every Western ever and it makes him slightly boring – for those of a certain age that is. Kids most likely love him, so at least in that respect, it does make sense for him to be a bigger part of the book. It was good to see Melodia get a decent part in the story but it is Mon*Star that everyone clamours for and more of him would go a long way to making this a far better book overall. Such as it is, this was okay but nothing to really be excited about.