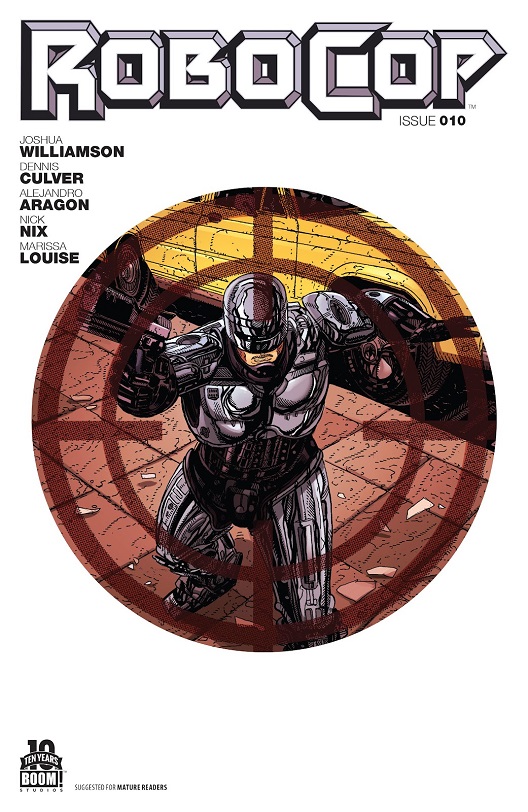 The riots in Detroit continue unabated for there is nothing that the police or OCP or Robocop can do to stop them. It is not for lack of trying but the fires that have been lying dormant in the populace have been ignited and they need a scapegoat. That just so happens to be the aforementioned people but more specifically, for whatever reason, they tend to focus on Robocop. Joshua Williamson and Dennis Culver stir the pot among the people of Detroit and the stick they use is Killian who at the moment is having a meeting with the mayor. It is here in this issue and at this moment that readers are finally treated to Killian’s origin story and while the truth is finally revealed it is nothing so grand as the usual run-of-the-mill super-villain. As it is, Killian’s talk goes according to his plan and he gets what he wanted out of it and the city loses its mayor in the process. While all of this goes down, Robocop is making what seems to be his last stand, willing to sacrifice himself if it will sate the people’s appetite over what they consider their grievances. The story moves at a very brisk pace and it is nice to see things continue to pick up even further than they were previously. With the cliff-hanger that the authors of this tale leave it on, one can see that it is only going to get even crazier with the next issue which means definitely tuning in. Alejandro Aragon who has replaced Carlos Magno on the book continues to do a good job of it, perhaps not as detailed as the former artist but gives it certain energy all his own which matches the frenetic events that take place within. With this issue, it means that there are only two more to go until it all ends and with where it has been headed of late, one has to know that Robocop is going to be in for the fight of his life, though if he wins that is one thing if the city recovers and a trust is gained back between the people and those who look to defend them is another. What one can glean from all of this is that it is going to be good and well worth the wait.