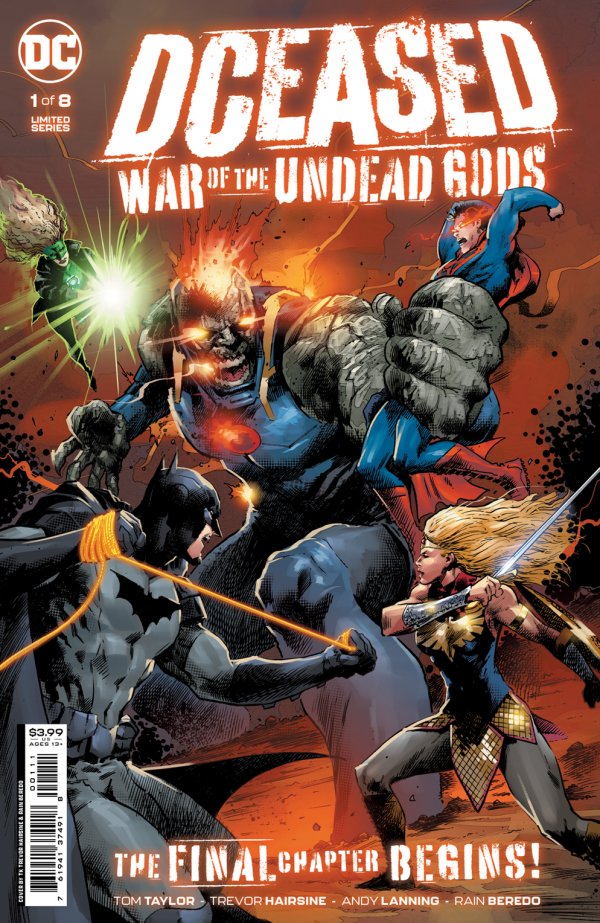 The Story – Though a cure has been found for the disease that turns man and superman alike into the undead, the threat still persists.

The Take – DCeased, which has been one of the most enjoyable series of titles to premiere in the DCU over the last five or so years continues here with what is purportedly its last outing. Written once more by Tom Taylor, the man does a great job of it and continues things where they left off with the cure being found and the heroes who were turned being saved though he does open the book on a scene which speaks to its title. Called War of the Undead Gods, he introduces them through a sequence that is all too familiar which is not the destruction of Krypton but the capturing of Kandor by the one and only Brainiac. Supergirl is then jettisoned off so that she might survive and instead of going to Earth, her parents change things up and send her to New Genesis to live among the gods. Things do not go as planned as readers are quick to find out. Taylor introduces this new threat in perfect fashion and creates a sense of dread right off the hop, for one has to know that he would not do it as such if he were not going to tie the rest of his story into it later on. The rest of the book is a feel-good tale that finds Green Arrow back among the living, as well as many others and then a desperate plan that is put into place that they might reclaim Superman who currently sits in the heart of the sun. Suffice it to say, Kal-El also makes a grand entrance back to the stage called life much to the happiness of all and it is not long before he is back in action too. Things wrap up with that expected tie-in to that opening sequence in two ways, one which is a little more subtle and quite possibly more horrifying as Mister Miracle and Big Barda decide to head home to New Genesis now that things are going back to normal on Earth, not knowing what awaits them. The other involves the arrival of Brainiac, defeated and with a grim message for all. This was a fun, breezy and exciting story which fans of DCeased are sure to love and with the pencils of Trevor Hairsine, it makes it all that much better as the man does a fantastic job. Leave the reader wanting more should be the motto for every comic that hits the stands and this one does just that.