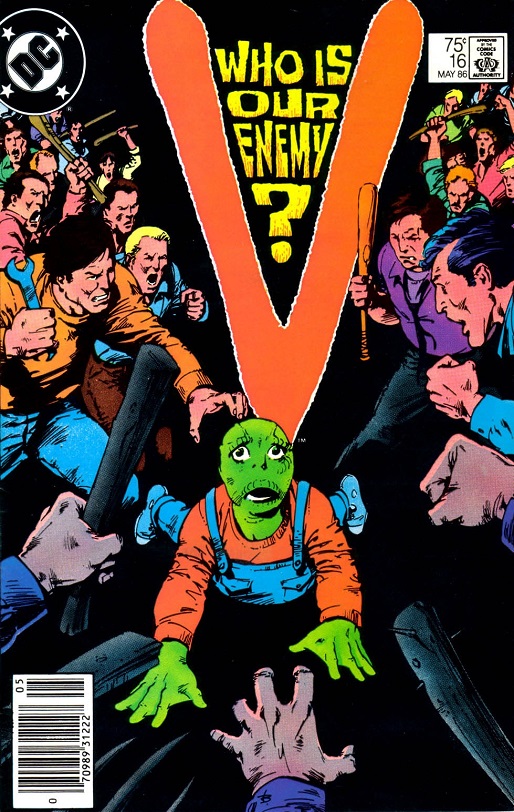 For the moment, Mike and Julie along with their charge – Prince Bron, are prisoners and they are currently awaiting their execution. They are unsure if they are going to make it out of this one alive but Bron might have a way if he can get his amulet working which was previously damaged. As the time arrives, miracles do happen and they manage to escape just when a Visitor ship comes into town looking for Bron and any resistance members they can find. Cary Bates writes a cracking tale full of suspense as the walls start to close in on Julie and Mike while up in space, the same begins to happen to Diana. Diana believes that she is on the winning side now as she has gotten rid of Lydia and to make matters even better, she gets word that Bron has been killed while sacrificing himself to save Mike and Julie. It is not exactly the way she had planned it but she will take what she can get, though it nags at her when she sees where the Prince’s death capsule ends up, a sentinel ship and she knows that she needs to get on board to discover just why that is. So it is that Diana does just that, knocks out her escort and discovers not only Bron’s body but Lydia, alive and well and learns that all of this had been one long plot devised by the Sirian ruler, her king and not only is she shocked but defeated as she knows that all she has worked for has been for naught. For long-time readers of this title, a lot of what Bates has been building towards in this book has been led to this moment, though it has not entirely played out as of yet. Things should get really interesting with the next issue but the ramifications of it can already be seen in the final few pages of the book as the Visitors who are about to kill Mike and Julie are forced to return to their ship instead of ending the lives of the earthlings who stand before them. Where exactly this leads is anyone’s guess but one has to know that Diana will try to save face and see if she can both salvage and continue their conquest of Earth. Carmine Infantino is on point once more, the man being the right choice to bring this tale to life and the book continually looks good under his purview. A very solid and entertaining title that is always a joy to read.