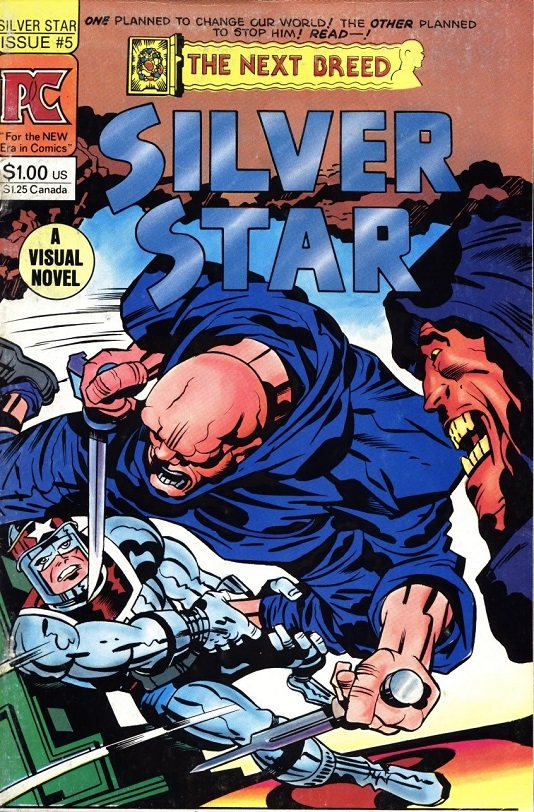 Jack Kirby gets things moving with this fifth issue of Silver Star with the hero of the story making nice with Big Masai right before they end up destroying the city as two incredibly large giants. Shrinking back down to their normal sizes, Star continues to try and convince Masai aka Elmo Frye, that people like them need to team up in order to survive as elsewhere, a man by the name of Darius Drumm is looking to destroy them and the rest of the world. With Drumm is the woman named Norma Richmond whom he had captured previously and the two have a very interesting conversation with bits about Satan, Silver Star, of power and what has to be a shot at Stan Lee, one that was very thinly veiled. What this book does most importantly though is to finally bring hero and villain together though they do not necessarily battle as air their grievances. There is a bit of action as Drumm’s clones are forced to attack Star and Richmond and those who were cast in the villain’s likeness prove to be no match for the good guys. Suffice it to say, when all is said and done it is time for the Silver Star and Darius Drumm to face each other but the former is no match for the latter it seems when it comes to experience with their powers and not only does Drumm get away, he also destroys the Earth in the process leaving the book on a massive cliff-hanger. To follow this up is another chapter of Last of the Viking Heroes by David Schwartz, Lynn Mivata and Michael Thibodeaux that finds Erik, friend and companion of the prince arrested and awaiting his execution, something which Sven will not stand for. Seeking out the rest of his friends who happen to be at the local tavern, they make a plan to free their friend even though it could be considered treason. While doing as such, they discover that Sven’s uncle is planning to kill his brother the king within the hour and there may be nothing any of them can do about it. This tale also leaves things off on a cliff-hanger, to be continued in the final issue of the series. Both stories ended up being a lot of fun and completely different in every possible way making for a well-rounded book with a little something for everyone.